If the project is approved by the Vietnamese government, the investor’s partners will come to Vietnam to manufacture wind turbine.

UK-based Enterprize Energy is seeking approval from the Vietnamese government to invest US$12 billion in an offshore wind power project off the coast of the central province of Binh Thuan.

Ian Raymond Hatton, chairman of the UK energy group, told Prime Minister Nguyen Xuan Phuc at the meeting on September 30 that the group will invest in wind power, transmission network, and wind turbine manufacturing in the country. They are working closely with Binh Thuan province’s government and local partners to speed up the project.

The group plans to use electricity from the project to electrolyze seawater for producing liquefied hydrogen gas and ammonia. In the first phase, it plans to mobilize investment capital from foreign partners and also invest in transmission lines to connect to the national power grid.

In particular, Mr. Hatton proposed the prime minister add the wind power project to the Vietnam National Power Development Plan (PDP) VIII with a view to starting generating electricity by the end of 2025 and becoming fully operational by 2028.

As this is the largest project of its kind to be carried out in Vietnam, problems in the process of seeking approval and executing may arise, the prime minister said. He asked the investor to closely work with relevant Vietnamese agencies to remove obstacles and accelerate the progress. He also hoped the investors will cooperate with Vietnam in the fields of oil, gas, and wind power equipment manufacturing.

The prime minister asked the group to work with the Ministry of Industry and Trade (MoIT) for the inclusion of this project in the PDP VIII.

Last year, Enterprize Energy received the permission from the government to carry out survey for its 3.4GW wind farm off the coast of Binh Thuan province on an area of 2,000 km2. 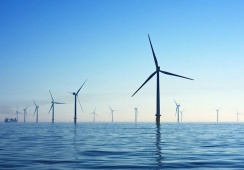 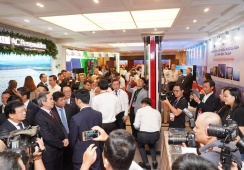