The Hanoitimes - According to the draft law, conditions for 12 business lines including commercial arbitration organizations, logistics and franchising, are proposed to remove.

Investors, especially foreign ones, are expecting more significant changes in the amended Law on Investment as they still have some concerns about the latest draft law.

The Ministry of Planning and Investment has recently released the draft law for comment, which is set to take effect on January 1, 2021.

Professor Nguyen Mai, chairman of the Vietnam Association of Foreign Invested Enterprises, said that the Fourth Industrial Revolution is exerting large impacts on the Vietnamese economy with lots of new issues and sectors emerging, but Vietnam has yet to build rules for them. Meanwhile, the draft Law on Investment also just focuses mostly on tax incentives, but less on land and other supporting policies.

Mai and businesses also agree that despite having a regulation on guarantee of investors’ interests when rules are changed, the draft pays attention to this for just investment incentives, and not the rights to asset ownership, asset transfer, legal transfer of profit to outsiders, and more.

The interested parties also urged for changes to make the draft more consistent with other laws such as the Law on Housing, the Law on Land, the Law on Environment Protection, and the Law on Real Estate Business.

Commenting on this, Dau Anh Tuan, director of the Legal Department at the Vietnam Chamber of Commerce and Industry, said that this causes confusion for enterprises, cities, and provinces because they do not know the people’s council or the people’s committee have this power.

Despite the concerns, the draft law includes some significant changes related the form of market access conditions and investment incentives for foreign investors.

This supplementation is aimed to simplify procedures, and increase transparency and feasibility in the application of the country’s commitments to open the market in alignment with new-generation free trade agreements and international treaties on investment.

According to the draft law, conditions for 12 business lines including commercial arbitration organizations, logistics and franchising, are proposed to be removed.

It also adds some sectors and investment activities subjective to investment incentives. They include R&D, business of products as a result of R&D, innovation activities, and manufacturing of goods or service supply created from or joining the value chain. 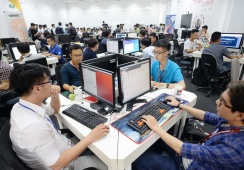 Vietnam’s IT gets golden chance from fresh investment wave