Foreigners side with locals to run counterfeit market in Vietnam

The manufacturing and sales of counterfeit goods have been on the rise over the past few years, particularly with the involvement of foreigners and the use of sophisticated methods to avoid detection of customers and authorities, said Hoang Anh Duong, vice director general of the Vietnam Directorate of Market Surveillance.

“A growing number of cases of fake and low quality goods, along with other forms of intellectual property infringement, are causing dissatisfaction among the public and negative impacts on the business community and environment,” added Duong.

In 2018, Vietnamese market authorities seized and handled 82,300 cases of legal violations, issuing fines of more than VND430 billion (US$18.52 million), seizing counterfeit goods and products worth VND150 billion (US$6.46 million).

Additionally, more than 6,590 cases of counterfeit and intellectual property infringements were identified in the first ten months of 2019 with fines of over VND19 billion (US$820,000).

According to Duong, one of the most challenging issues in dealing with trade fraud activities is to determine the origin of fake goods. This is especially true for goods without clear producers such as agricultural products, input materials, among others.

“Without clear evidence or quality test, the detection of violations is very difficult, particularly with goods smuggled through hidden trails,” Duong added.

In the market, fake goods are often mixed with the real ones, making it difficult for the authorities to detect, Duong continued.

To prevent fake goods in Vietnam, Duong expected the market authority to improve the method of information collection, while raising people’s awareness about the issue of counterfeit goods.

Phan Ngan Son, deputy head of the Intellectual Property Office of Vietnam under the Ministry of Science and Technology, said Vietnam is giving priority to protecting intellectual property rights through the establishment of the National Steering Committee 389 on combating smuggling, commercial fraud and counterfeit goods.

Son, however, acknowledged the issue has not been addressed properly, partly due to limited resources and lack of understandings on intellectual property from the law enforcement authorities.

Vietnam is currently named in the watch list of the Special 301 Report of the US Trade Representative, which identifies those who do not adequately or effectively protect and enforce intellectual property rights.

Nguyen Ngoc Tuyet Trinh from L’Oréal Vietnam cited statistics that in 2008, fake cosmetics products held up to 75% of the market share in Vietnam. However, thanks to strong efforts from government agencies, the number of fake goods dected was significantly reduced in the 2012 – 2014 period.

Trinh said the booming of e-commerce in Vietnam has in some way lead to a surge in fake goods, in which 60% of L’Oréal products in Vietnam are fake and smuggled goods.

Regarding this issue, Do Duc Tao, officer from C03, the police department for corruption, economic crimes and smuggling, expected both local and foreign companies to invest in technologies to protect their own brands.

“The effort of the authority alone could not prevent fake goods in the market, more support and cooperation from both customers and the business community are necessary to effectively carry out the work,” added Tao. 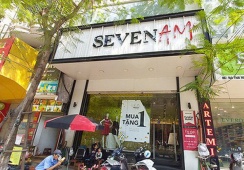