The launching ceremony of the French-Vietnamese digital library, which is called Flamboyant Library, was held on the morning of April 7 in Hanoi.

According to Kieu Thuy Nga, Director of the National Library of Vietnam, the French-Vietnamese digital library was first introduced on February 12. After more than one month of trial, the library registered about 5,313 visits, of which about 1,254 were from Vietnam, showing the great interests of French and Vietnamese scholars and community on its archived documents and books.

The French-Vietnamese Digital Library includes more than 2,000 typical documents that were selected from the national libraries of the two countries. Readers can search documents via the library website https://heritage.bnf.fr/france-vietnam and read books in Vietnamese or French.

The library’s documents exist in various forms such as printed documents, manuscript, maps, audio, pictures and sketches. It is divided into eight main categories including Circulation; Tradition; Thought and Spirit; Literature; Culture Transfer; Dynasties and Government; Science and Society; and Economics. There are many valuable documents stored on the website including such as record of ancient cheo (Vietnamese folk singing), ‘Kieu’s tale’ poem, among other classic valuable scripts.

In addition to these original documents, there are 19 introductory articles by experts, researchers and librarians from Vietnam and France to help readers better understand the context of available documents in the digital library.

“With this digital library, we hope that our readers will be able to access these ancient resources at ease, thus, meeting their researching needs”, said Nga from the National Library of Vietnam.

The library, a result of collaboration between the French National Library and the National Library of Vietnam came into being thanks to the thorough job of a scientific committee consisting of 12 members. 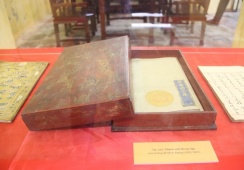 The National Library of the Nguyen Dynasty opened