The Hanoitimes - If flights between Vietnam and France are still suspended, the French experts would fly to Vietnam via a third country.

A representative of the Transport Ministry said the ministry has extended the invitation to French experts and their tentative arrival schedule. Their arrival is still pending the arrangement by the French side.

The representative added that if flights between Vietnam and France are still suspended, the French experts would fly to Vietnam via a third country.

The experts from the French consultancy Apave-Certifier-Tricc (ACT) consortium left Vietnam during the Lunar New Year break in late January and have been unable to return to Vietnam due to travel restrictions in place to combat the Covid-19 outbreak.

The safety evaluation of the Cat Linh - Ha Dong line remains incomplete. Without the French consultants, the test run of Hanoi’s first railway project would not be carried out and thus, no safety evaluation would be conducted, leading to further delay of the almost frozen project.

Accordingly, the consultant will evaluate and issue a certificate for the safety and quality system of the project and submit to the Vietnam Register for appraisal and certification. After that, the investor will accept and hand over the project to the Hanoi People's Committee for official operation.

The representative of the Ministry of Transport affirmed that it could not find another consulting partner to replace the French experts because the contract with them had been already signed and this is the most prestigious and experienced group in system safety assessment for urban railway projects in the world.

Besides, nearly 100 experts and personnel of China Railway Sixth Group - the EPC contractor have come to Hanoi to prepare for the trial operation of Cat Linh - Ha Dong urban railway system.

Among them, 20 Chinese experts are under health quarantine since October 21. They have tested negative for the Covid-19 and meet the necessary requirements to return to work.

The first task of the experts will be to complete the pending work and handle relevant paperwork ahead of the trial run of the line, according to the MRB.

The investor planned to check and take over the finished project in January 2021 and hand it over the Hanoi People's Committee for completion in the first quarter of 2021.

The Cat Linh-Ha Dong route will run 13.5 kilometers from the downtown Dong Da district to Yen Nghia station in Ha Dong district. Its construction began in October 2011 and completion was delayed by years due to various issues.

The first urban metro line is one of the key public transport projects in Hanoi. Since September 2018, this project has tested all 13 trains, with an average speed of 35 kilometers per hour. 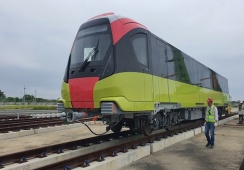