From bitter and expensive to Hanoi’s favorite drink: The rise of Bia Hoi

Bia Hoi beer is not merely a favorite drink of the local people but going to a Bia Hoi is also a popular activity.

"Bia Hoi Hanoi" signs are everywhere in this bustling city.

They are usually accompanied by people on small, plastic stools, typical of Vietnam, toasting glasses of cold beer and engaged in lively conversation.

Bia Hoi beer is not merely a favorite drink of the local people but going to a Bia Hoi is also a popular activity. As such, Bia Hoi signs symbolize more than just refreshing ale but also a familiar social place for Hanoians.

In fact, the Vietnamese only started drinking beer a few decades ago. For centuries, traditional wines made from rice and fruit were their alcoholic beverage of choice. Until the 18th century, only wealthy people had the opportunity to savor grape wine brought by the Portuguese from Macao to Vietnam.

This began to change, however, in the 1890s, when the country's first brewery was opened in Hanoi by the French. It was known as Hommel Brewery.

With some 30 workers, Hommel Bewery, produced 150 liters a day, mostly serving French military officers and soldiers in Hanoi. This new strange drink, however, was too bitter for the taste of the local population nor could they afford it.

After the French withdrew from Vietnam in 1954, Hommel Brewery was renamed the Hanoi Brewery and continued producing bottled beer. However, Hanoi’s carousers did not pay much attention to it. They called it “a luxury product” for the rich, preferring their cheap traditional wine.

Another challenge for bottled beer production was transportation. When the brewery hit on the idea of producing an instant draught beer called Bia Hoi, however, it suddenly found it had a much brighter future.

Nevertheless, the locals were so loyal to their wine that Bia Hoi was still overlooked. It wasn’t until the government clamped down on home-made spirits that Bia Hoi started to taste better to the people's palates. They soon realised that the legal alternative, Bia Hoi, made a refreshing, low-alcohol drink (only 2-4% alcohol by volume or ABV) and less hot than rice wine, perfect for the severe Hanoi summers. The popularity of Bia Hoi and Bia Hoi culture, suddenly began to grow.

Fast forward to the present day and elders now sits together at Bia Hois across Hanoi, recalling their youth. In particular, the 1970s, under the ‘subsidy economy’, when they had to stand in long and lengthy queues to buy beer. Back then, the supply was limited by coupons and/or food stamps. Even if you had money, you could not buy more than anyone else.

Drinkers now are different. Since the Doi Moi policy in 1986, hundreds of privately-owned Bia Hois have appeared in Hanoi. They can be easily recognized by their “Bia Hoi Ha Noi” signboard. Customers are welcomed at the gate and after taking a comfortable seat, they can order as much as they want, for as long as their pocket can afford it.

From small to large, in all four seasons, both pavement Bia Hois and luxury Bia Hois are always full of guests. Obviously, summer is the hottest season and thus when Hanoi is thirstiest for Bia Hoi.

From table to table, “1,2,3...dzo” (1,2,3...cheers) resounds constantly followed by the clink of glasses. The group with the loudest “dzo” are the winners in this "game". Meanwhile, waiters do not let the “dzo” chants stop as they quickly replace empty glasses with full ones.

Workers, blue- and white-collar alike, stop at Bia Hois at lunch or after finishing their working day. Many business partners meet and toast at a Bia Hoi after signing a contract or even for a negotiation. Members of sport clubs go to drink Bia Hoi after playing. Families or friends also choose Bia Hoi to gather and relax on the weekend.

Not only residents but foreigners also love Bia Hoi. Beer Junction at the intersection of the pedestrian streets of Ta Hien, Ma May and Luong Ngoc Quyen, in the central Old Quarter, is a popular place for to meet.

Tourist, Oliver Brann, says Bia Hoi is a ‘must’ for visitors to the city.

“It’s fresh, crisp and freely available in a stunning, cracker of the country. Only about 40 cents for a glass. Sounds like paradise, right? I think it’s the world’s cheapest beer,” Matt Anderson, an Englishman who has been living and working in Hanoi for 3 years, agrees.

"Ah Bia Hoi, I love it, although the quality varies a lot in different places. Anyway, not only is it generally tastier but it is also much cheaper... You can get cheap snacks like peanuts too. It is great fun cheap entertainment and something not to be missed.”

Anderson goes on to say, however, that the price is only a secondary consideration.

“That is not the best part of these Bia Hoi joints. What you really get is to experience the local hanging out scene. It is much like coffee houses where a mostly male clientele sit around and share their daily experiences over a beer.”

Besides Bia Hoi, craft beer brands are also on the rise in Hanoi, bringing more options to Hanoi’s beer drinkers.

These craft beers are incredibly diverse from the fragrance to the taste. In recent years, flavors such as lemongrass, cinnamon, liquorice, artemisia, anise star, passion fruit, kumquat, docynia indica, even Vietnam’s favorite staple dish pho, have all cropped up in Hanoi..

"With craft beer, there is unlimited creativity," said Nguyen Van Cuong, the owner of C-Brewmaster. His company now produces about 40 kinds of craft beer that utilize beer brewing techniques from Europe and local ingredients for the perfect taste for Vietnamese consumers.

There will be more types of craft beer cropping up in Hanoi in the future, however, they will never take the place of that beloved, Hanoian institution, the Bia Hoi. That tasty drop, of yellow, frothy beer poured from the tap of a street side Bia Hoi, while people repeatedly cry "dzo", makes for one of the most lively experiences in Hanoi and it can never be replaced. 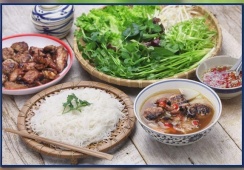