The Hanoitimes - Given a large gap between domestic and international gold prices, it would be high risks for investors to bet their money on gold at the moment, said an expert.

Vietnam’s gold market has witnessed strong market volatility in the first month of the year, for which experts warned such trend could further persist in February due to global economic-political uncertainties.

While the global gold prices are on a declining trend, it is expected to go up in long-term at a time when governments around the world are injecting cash and draft supporting polices to speed up economic recovery process.

Moreover, high demand for gold after the Lunar New Year holidays in Asian countries could further drive prices of this precious metal up.

In a surprise move, India, the second-largest consumer of gold in the world after China, announced its decision to cut half the import duty for gold and silver, saying the move is necessary to curb inflows of illegal supplies and boost domestic consumption.

According a Kitco News outlook survey, 84% of respondents said they see gold over $2,000 an ounce by the end of 2021, while Credit Suisse expected the gold prices to average $2,100.

On February 3, SJC gold prices topped VND57 million (US$2,487) per tael, driving domestic gold prices up to around VND5.3 million ($231.27) per tael, higher than the prices in global market.

With three weeks away from the God of Wealth Day [February 21], the day when people would rush to buy gold expecting this would bring good fortune to their businesses and families in a new year, the gold prices are expected to go up.

Investor Director of Maybank KimEng Vietnam Phan Dung Khanh predicted the gold prices in the God of Wealth Day would rise by 3-5% from previous days.

Given a large gap between domestic and international gold prices, banking expert Nguyen Tri Hieu said it would be high risks for investors to bet their money on gold at the moment.

In fact, over the last few months, many gold investors have suffered losses of up to hundreds of dollars per tael due to a volatile market, added Mr. Hieu.

Sharing Mr. Hieu’s view, economist Can Van Luc said a new US administration under President Joe Biden with different economic policies could cause a major shuffle in the international gold market. 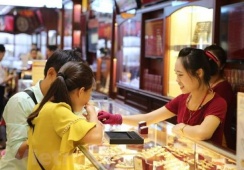