Vietnamese enterprises with higher law compliance cost than their Thai peers make less competitive products despite equaling them in productivity, according to Phan Duc Hieu, vice director of the Central Institute for Economic Management (CIEM).

“A good legal environment is key for competitiveness,” said Hieu at a workshop discussing market entry regulations in Vietnam on February 28.

There remain inefficient and unreasonable regulations restricting market entry for newcomers, Hieu stated, adding they are creating five types of costs for enterprises, including unofficial costs during the process of realizing administrative procedures; opportunity costs due to prolonged administrative process; investment costs to meet legal requirements; different taxes; and time.

“Even a small reform could make a significant impact on large scale,” Hieu asserted.

For example, a reduction of one hour for enterprises in realizing administrative procedures means a large amount of resources saved, given over 700,000 enterprises operating in the country.

Hieu expected the new Law on Enterprises, which is scheduled to come into force on January 1, 2021, would spur the development of the business community, thanks to a strong focus on lowering market entry regulations and creating greater freedom for enterprises to do businesses.

Hieu referred to a study on corporate governance of Vietnamese public companies in 2019 pointing out that those with higher score in this aspect would have high return on assets (ROA) and return on equity (ROE).

Dau Anh Tuan, director of the Legal Department under Vietnam Chamber of Commerce and Industry (VCCI), said there have not been significant improvements in corporate governance of Vietnamese businesses since the Law on Enterprises in 2014.

“This is the key aspect that would help Vietnamese enterprises to grow, which, unfortunately, leaves much to be desired,” Tuan said. 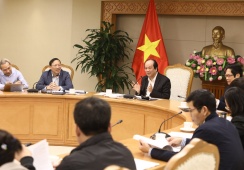