The Hanoitimes - The leader of Hanoi Urban Environment Company (Urenco) said that he will mobilize 100% of human resources to collect garbage in urban districts.

The move came after Secretary of the municipal Party Committee Vuong Dinh Hue asked the municipal authorities to provide free health insurance for people affected by contamination in a radius of 1,000 meters, as requested by the people.

Besides, Mr. Hue assigned Soc Son district's authorities to persuade citizens to remove the roadblocks because this is a legal violation.

A leader of Hanoi Urban Environment Company (Urenco), which is in charge of collecting waste in the inner city, said that he will mobilize 100% of personnel to collect garbage in metropolitan districts and free the downtown from piles of garbage.

The garbage crisis began three days ago, when some residents of Nam Son, Bac Son and Hong Ky communes impeded the entry of garbage trucks to the Soc Son waste treatment complex, leaving downtown areas loaded with garbage. They blamed the authorities for the slow compensation and resettlement, leaving them exposed to diseases due to heavy pollution.

This is the second time in 2020 and the fifteenth since the dump was put into operation that people have prevented garbage trucks from entering the landfill, resulting in thousands of tons of garbage piling up along streets in the capital city. Thus, these days, Hanoi is once again plunged in a garbage emergency.

The Soc Son Waste Treatment Complex is the largest in Hanoi, spanning over 157 ha, was built in 1999 in Nam Son, Bac Son and Hong Ky communes. The complex handles around 5,000 of the 6,500 tons the city generates each day. The other 1,500 tons are treated at the Xuan Son landfill in Son Tay Town and other small waste treatment facilities.

Hanoi discharges 6,500 tons of solid domestic waste daily and 89% of which is buried. 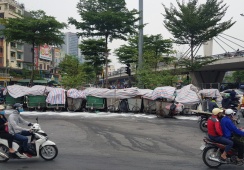