The first tour after social distancing order was removed in Hanoi entertains visitors with the best examples of French architectures in the capital city.

The “French architecture in the heart of Hanoi” walking tour was launched by the Vietnam National Museum of History in cooperation with Hanoitourist Corporation on October 23.

This is the first tour in Hanoi after the fourth wave of the Covid-19 pandemic, with the motto “safe travel” in the new normal.

In response to new developments as well as tourists’ increasing demand for enjoying cultural and historical values, the “French architecture in the heart of Hanoi” walking tour would bring new experiences to visitors, said Phung Quang Thang, Chairman of the Hanoi Travel Association and Director of Hanoitourist Corporation at the launching ceremony.

Visitors on the tour explore the famous architectural works of Hanoi while walking on the streets of the so-called French quarter.

In the opening day, there were about 60 visitors, divided into six groups to ensure “safe tourism”.

Throughout the period of the French colonial rule, Vietnamese identity and charm were enhanced with Western-style architecture. Some of the city’s buildings left from this time illustrate cultural inspiration worth celebrating.

Through vivid explanations with rich and fascinating information, visitors have a grandstand view to identify and compare the remarkable values of the architectural works and styles, as well as the Vietnam-France acculturation in the early twentieth century. In about 90 minutes touring the area, visitors are taken to the Vietnam National Museum of History, Hanoi Opera House, Sofitel Metropole Hotel, Tonkin Palace, Dien Hong Park.

As one of the first visitors to experience the tour, Du Khanh Toan, 73 (Trang Thi, Hoan Kiem District), expressed his feelings: “I really like this because for a long time we haven’t been able to comfortably stroll around the streets and visit the relics.

Walking around these places and listening to the tour guide’s explanations, I understand and love the attractions, which I thought I was familiar with, even more”.

Six-year-old Hoang Thao Nguyen (Dinh Cong, Hoang Mai) excitedly said: “I am very happy because I can have fun and learn more about famous architectural works of Hanoi”.

According to Nguyen Thu Hoan, Deputy Director of the Vietnam National Museum of History, in order to ensure safety and abide by the current regulations, each tour group consists of no more than 10 members, while the groups will keep their distance and avoid contact with each other in accordance with the motto "no touch".

The “French architecture in the heart of Hanoi” is be held every weekend from October 23, 2021.

On this occasion, so as to promote the adaptation of technological applications and museum digitalization to the new normal, the Organizing Board also launched an audio guide application (the Audio Guide App) that introduce the displays of the Vietnam National Museum of History on smartphones in three languages of Vietnamese, English and Korean.

Visitors, including many children, are explained on how to use the app at the Vietnam National Museum of History.

To use the automatic narration App, visitors can access the link of http://app.baotanglichsu.vn, or scan the QR code to download the app at the reception desk of the Vietnam National Museum of History.

In the coming time, the museum will continue to introduce some online tours with different themes to help visitors access the display more conveniently.

Visitors to the online tours can also make an advance registration at facebook.com/BTLSQG.VNMH. 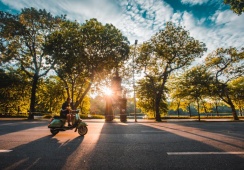