The two cities are believed to continue to outperform in terms of economic growth and foreign direct investment.

Hanoi and Ho Chi Minh City, two largest cities in Vietnam, are among the best performing metropolises worldwide in terms of economic and real estate potential, putting them in high positions in foreign investment attraction, JLL has made remarks.

With the respective seventh and third in JLL’s City Momentum Index, Hanoi and Ho Chi Minh City that are in a region with the highest potential for growth worldwide are believed to continue to outperform in terms of economic growth and foreign direct investment, said Stephen Wyatt, managing director of JLL Vietnam.

“Vietnam’s business-friendly policies and the securing of free trade agreements with more than 60 countries have helped create an export-driven economy that strengthened the attractiveness and momentum of Hanoi and Ho Chi Minh,” the executive said in a recent press release.

In 2019, Hanoi took the lead in attracting FDI with US$8.3 billion, Ho Chi Minh City ranked the second with US$7 billion, statistics by the Ministry of Planning and Investment showed.

Ho Chi Minh was even singled out by real estate analysts as a favored location by residential investors due to its growth potential and higher yields, which exceed that of Bangkok’s and Singapore’s, according to Chinese international residence investment platform Juwai.

The redevelopment of the Thu Thiem Urban Area which is across from the city’s business district along the Saigon River is set to provide Vietnam’s largest city with new homes, parks and offices.

This kind of foresight has become essential for many Southeast Asian cities as this area is also one of the world’s most vulnerable regions by climate change, according to JLL, is a leading professional services firm that specializes in real estate and investment management.

Vietnam, Myanmar, and the Philippines are similarly vulnerable, among the 10 hardest-hit countries by climate change, according to the Global Climate Risk Index by non-governmental organization German Watch.

“Southeast Asia has some of the world’s fastest growing and most dynamic cities,” says Jeremy Kelly, lead director JLL Global Cities Research. “With mass migration and greater urbanization, many cities here are stretched when it comes to resources. Compounding the problem is the fact key cities like Manila, Ho Chi Minh, Bangkok and Jakarta are in low-lying areas where rising sea levels are another inescapable stressor.”

However, climate change in this region could stifle growth prospects. The Asian Development Bank estimates that the mean cost of climate change for Indonesia, the Philippines, Thailand, and Vietnam could amount to losing 6.7% of their combined GDP each year by 2100. This is more than twice the average loss globally, JLL said. 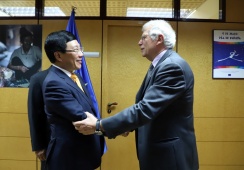