The Hanoitimes - The Vietnamese tourism industry highly relies on domestic travelers and the soon containment of the pandemic in key source markets for recovery.

The absence of leisure travelers and closure of city attractions in Hanoi translated in the segment's poor performance, with a year-on-year (YoY) decreases of 51% and 49% in revenue per available room (RevPAR) in the secondary area and central business district (CBD), respectively, in the first three months of 2020.

This drop was stated in the Hanoi Hotel Market Report Q1/2020 on April 27 by Savills Vietnam.

In the first quarter of 2020, five-star hotel average occupancy decreased 32 percentage points (ppts) YoY. Average room rate (ARR) was US$127 per room per night, down 13% YoY leading to a decline of RevPAR by 46% YoY. The number of business travelers to five-star hotels decreased, but remained the main guest source to maintain five-star’s in the lead in the segment.

Three- and four-star hotels had the worst performance with a slump by 60% in RevPAR, mostly incurred by a drop in leisure trips to Hanoi. In March, some small-scale owners temporarily closed and furloughed employees.

Statistics from the Hanoi Department of Tourism showed that 151 hotels were closed in districts of Hoan Kiem (78) & Dong Da (73) from February to March 19.

The West of Hanoi RevPAR decreased 43% YoY, hit by a late March performance drop after postponement of the F1 Grand Prix resulted in cancelled bookings.

In the first three quarter, the capital city welcomed approximately 3.85 million visitors, down 47.2% YoY to the lowest level in the past five years. International arrivals declined by 43.9% YoY to 956,000; and the number of domestic travelers was down 48.2% YoY to 2.89 million.

From 2020 on, the Hanoi hotel industry will have over 10,000 rooms and almost 59% of which will be in the secondary area. Five-star hotels will dominate future supply at 65% and 64% will be in the secondary area. Six projects with over 1,100 rooms are expected to enter the market in 2020, of which 75% will be under international management from Accor, Capella and Marriott. However, due to the impact of coronavirus, completion of those projects may suffer delays.

The World Tourism Organization (UNWTO) estimated that global international travel in 2020 could decline between 20-30%, which could translate into a loss of US$30-50 billion in international visitors spending.

According to the Vietnam National Administration of Tourism, the best scenario for Vietnam’s tourism in 2020 would be a decline by 70% YoY in international arrivals, with 5.5 million visitors.

The tourism industry highly relies on domestic travelers (82.5% of visitors in 2019) and the soon containment of the pandemic in key source market such as China and Korean for recovery. 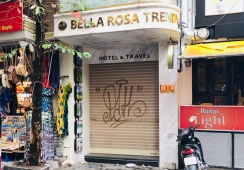