The low industrial output growth rate revealed difficulties faced by companies in the sector, especially those in manufacturing and processing.

Under severe impacts of the Covid-19 pandemic, Hanoi's Index of Industrial Production (IIP) in April contracted 14.7% month-on-month and 4.3% year-on-year, but managed to expand 2.3% year-on-year in the January - April period, according to the Hanoi Statistics Office.

The low growth rate revealed difficulties faced by companies in the industry sector, especially those in manufacturing and processing, said the municipal Statistics Office in its monthly report.

As a result, many companies are left in a dire situation of having no orders, forcing them to scale down or even suspend operations.

In the industry sector, the mining industry’s output decreased 16.7% year-on-year between January and April, while the manufacturing and processing industry expanded at a modest rate of 1.9%.

Production and distribution of electricity rose 7% year-on-year; and water supply, sewage treatment and water collection was up 5.6%.

Meanwhile, other subsectors increased sharply due to growing demand during the pandemic, including food processing up 3.4% year-on-year; medicine and drugs up 43%; furniture production up 21.1%; and electronic products up 18.5%, among others.

According to the report, the city has taken drastic measures to realize the dual target of containing the pandemic and maintaining economic growth for stable social security, stated the report.

This included plans to speed up development of sectors with high growth potential in the current pandemic situation such as food processing, medical equipment production, e-commerce, e-payment, and online learning.

In April, Hanoi’s consumer price index (CPI) declined 1.4% month-on-month but went up 2.65% year-on-year. As a result, the average CPI of the first four months grew 4.57% year-on-year.

Statistics revealed seven out of 11 commodity groups, which are components of the basket for CPI calculation, witnessed monthly decreases in prices, with transportation posting the deepest fall of 12.73%, followed by housing, water and electricity supply, and construction materials with 2.56%; garment, footwear and hats with 0.56%.

In terms of foreign direct investment (FDI), Hanoi approved 235 new projects and other 35 received additional capital worth a combined of US$689 million in the first four months, while foreign investors contributed US$293 million in capital to other projects.

The Covid-19 pandemic and the nationwide social-distancing order have caused negative impacts on consumer sentiment, subsequently affecting services in the capital city.

Specifically, total retail sales of consumer goods and services in Hanoi in the four-month period are estimated at VND165.9 trillion (US$7.07 billion), down 6.3% year-on-year.

As tourism is among the hardest hit sectors by Covid-19, the number of foreign tourists coming to Hanoi declined 58.5% year-on-year to 671,000 during the period, while that of domestic tourists stood at 1.63 million, down 57.6%. 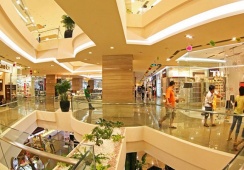 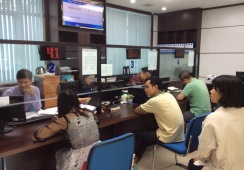