The Hanoitimes - About 550 rowers participated in the festival taking place on West Lake.

The Hanoi Dragon Boat Racing Festival 2020 was held today [November 14] on West Lake with the aim to celebrate the success of the city's 17th Party Congress, towards the 13th National Party Congress, as well as preserve the country’s traditional sports and promote the city’s culture and tourism.

The third festival is a product of a cooperation agreement between the Hanoi People’s Committee and national flag carrier Vietnam Airlines on cultural and sports development in the city.

It has attracted 550 rowers of 31 teams from 22 delegations in five cities and provinces (Hung Yen, Thai Nguyen, Vinh Phuc, Ben Tre and Hanoi), eight districts of Hanoi, six organizations which are the United Nations and the embassies of the UK, Denmark, Sweden, Australia and the US, and three Vietnamese businesses.

In parallel with preventing Covid-19, the city continues to stimulate domestic tourism and enhance the spirit of culture and sports among local residents and other provinces, Mr. To Van Dong, director of the municipal Department of Culture and Sports told Hanoitimes.

“Although this year's event was delayed several times due to Covid-19, the festival attracted a large number of participating teams and was well received by the Hanoians. I hope that the event becomes a specialty of the capital and will continue for many years to come,” Mr. Dong said.

During the festival, participating teams are divided into professional and amateur categories. Due to Covid-19, professional teams from other countries and from the Center and the South of Vietnam cannot join the festival.

At the event, local residents can enjoy impressive competitions as well as artistic performances.

The annual festival. which had been postponed in February because of Covid-19, is expected to create a new playground for people who love boat racing and attract more tourists to Hanoi.

First-ever dragon boat racing festival to be held in Hanoi 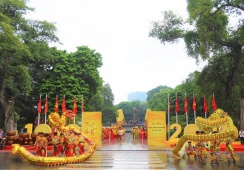