Lotte is committed to further supporting Hanoi’s socio-economic development, including a startup fund and farm export to South Korea.

Hanoi’s authorities are working on bottlenecks related to the construction of the US$600-million Lotte Mall Hanoi project in Tay Ho district, which is set to complete in 2023.

“Hanoi would continue to listen concerns from foreign investors in the city, including those from Lotte,” said Anh.

According to Anh, Vietnam and South Korea are scheduled to celebrate 30th anniversary of the establishment of bilateral relations by 2022, for which Hanoi expects Lotte would continue to expand its operation in the city.

“In the 2021-2025 period, Hanoi would be active in attracting capital inflows from a shift of global foreign direct and indirect investment capital,” Anh said.

For his part, Lotte Properties Hanoi’s General Director Song Jung Ho expressed his impression on Vietnam’s success in containing the Covid-19 pandemic, saying this is an opportunity for foreign investors to continue enjoying a favorable investment environment.

Ho expected Hanoi to continue supporting the implementation of the Lotte Mall Hanoi project to ensure its completion as scheduled.

Ho said Lotte is committed to further supporting Hanoi’s socio-economic development, including the setup of a startup fund and boosting the city’s farm exports to South Korea. 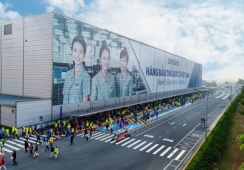