The Hanoitimes - An opening ceremony of the week will take place on November 16 and last until November 23.

This year, the organization of event will be geered towards strengthening the great national unity bloc as well as preserving the values of the traditional cultures of Vietnam’s ethnic groups.

An opening ceremony of the week will take place on November 16 at the Vietnam National Village for Ethnic Culture and Tourism and last on November 23.

Within the framework of the annual event, there will be a host of special activities such as welcoming the moon lady and a number of folk performances of the Thai people (Nghe An); introduction and recreation of the wedding ceremony of the Pa Then ethnic group (Ha Giang); the performance of unique art forms of the Tay and Nung people (Lang Son), and the Kate festival of the Cham people (An Giang).

The program aims to preserve and uphold the traditional cultural value of Vietnamese ethnic communities and enhance the great national unity bloc, while  promoting the Vietnam National Village for Ethnic Culture and Tourism as an attractive tourist destination among visitors from both home and abroad.

The Great National Unity week - Vietnam Cultural Heritage week is an annual activity hosted by the Ministry of Culture, Sports and Tourism in coordination with the Central Committee of the Vietnam Fatherland Front. The activity is of practical significance to honor and encourage the great unity of the Vietnamese people and the values of Vietnam's cultural heritage. 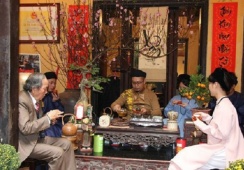