The Hanoitimes - Hanoi’s move is in line with the government’s press reshuffle plan by 2025 with an aim to reinforce pubic trust in the society and combat fake news and disinformation.

Hanoi will cut down 10 news agencies following the government’s plan on reshuffling the press in 2020.

Under which, six magazines and three newspapers will cease to exist and one newspaper will be merged to another, according to a decision by the Hanoi People’s Committee.

In a second phase, those media outlets need to stabilize their operations after the reshuffle. The stabilization will take place from January 2021 throughout 2025.

Of them, printed newspapers and magazines will work under the form of one media outlet consisting of different publications. E-newspapers and e-magazines need to update technology to ensure good operations with missions of guiding the public and promoting external information services.

Hanoi’s move is in line with the government’s press reshuffle plan by 2025 with an aim to reinforce pubic trust in the society and combat fake news and disinformation.

In the course of fast growth of electronic information, Vietnam’s press should be revamped to keep up with the movements of global media, mostly the boom of social networks, domestic experts have said.

As such, the planning focuses on encouraging the operations of electronic versions and gradually switching from print to electronic magazines.

The PM-approved planning lays stress on downsizing the scope of the press by cutting the number of printed newspapers and magazines, general news portals, radio and television stations. 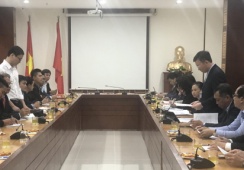