Hanoi urged to be cautious about relaxing residency conditions

The Hanoitimes - The Hanoi government should make a plan to reduce the population density in urban districts to avoid the mechanical population increase and disrupting social infrastructure.

The relaxing of strict conditions on residency registration in a big city like Hanoi will reduce administrative procedures and ensure equal right of residence for every Vietnamese; however, the relaxation should done in a prudent manner, Kinh Te & Do Thi quoted experts as saying.

Despite recognizing the move would exert great pressure on infrastructure, the Hanoi People's Committee has supported the removal of specific conditions for residency registration as they “only prevent citizens from being registered as permanent residents, and have not helped curb migration to large cities.”

However, if the policy takes effect, Hanoi may face population pressure due to free immigration. Temporary residents can easily switch to permanent residence and an increase in number of migrants will put enormous pressure on infrastructure and public services, create enrollment pressure for the public school system, especially in urban districts.

Talking to Kinh Te & Do Thi newspaper, lawyer Nguyen Van Hung from CHD Law Limited Company said that specific conditions of registration for permanent residence in Hanoi are outdated and not helping the control of residents.

Therefore, Hanoi needs to loosen up and find other solutions, Hung said, adding that the municipal government should make a plan to ease the population density in urban districts to avoid the mechanical population increase and disrupting social infrastructure.

In anticipation of the potential population rise if the residency registration conditions are removed, the lawyer believes that Hanoi’s authorities need to have policies to invest in the expansion of health, education, transportation networks and housing development as well as the relocation of city dwellers to outlying districts.

Hanoi should choose a gradual easing plan instead of scrapping the conditions of urban residence registration at once, which can lead to rapid population growth and the local authorities are not prepared to handle, Hung stressed.

Recently, the Vietnamese parliament's Legal Committee has held a meeting with Hanoi’s government to review the enforcement of some provisions of the amended Law of Residence in the city. 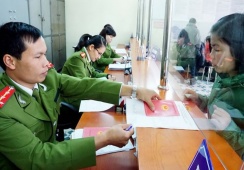