The city by 2045 is expected to become a financial and economic hub of Asia and an attractive global city with GRDP per capita of US$37,000.

Ho Chi Minh City (HCMC) is taking firm steps to digitalize economy and society, making it to bdcome one of the Southeast Asia’s economic hubs by 2030 with a GRDP per capita of US$13,000.

HCMC’s 11th Party Congress for the 2020-2025 tenure set the vision for the city to become a smart city and play a pioneering role in promoting innovation for greater socio-economic development.

By 2025, the city expected its GRDP per capita to average US$8,500 and five years later, the figure would rise to US$13,000 as HCMC would transform into an economic – financial – trade hub in the Southeast Asian region.

The Party Congress’ resolution envisioned HCMC by 2045 to become a financial and economic hub of Asia and an attractive global city with GRDP per capita of US$37,000.

Given such ambitious targets, HCMC’s leaders identifies the necessity to revise the economic growth model for greater growth quality, along with a focus on promoting spearhead economic sectors of high added value.

Another key priority is to apply science, technology and innovation to improve productivity. In the next five years, HCMC would focus on the development of financial services, banking, tourism, trade, and logistics infrastructure, along with a shift towards production and exports of products with high technological contents.

Such moves are expected to help local enterprises better integrate into global supply chains and enhance the city’s overall competitivenesss.

Last December, the National Assembly in an unprecedented move approved the establishment of a city within HCMC, namely Thu Duc, by merging three eastern districts of 2, 9 and Thu Duc. These three districts’ combined GRDP  in 2020 was higher than that of Binh Duong and Dong Nai provinces and made up one-third of the HCMC’s gross regional domestic product (GRDP).

The new Thu Duc city would develop based on the foundation of knowledge economy, with a strong focus on creating the growth driving forces for economy, education and healthcare.

Inside Thu Duc city, Saigon Hi-tech park is home for thousands of scientists and engineers to create products capable of competing on the international level.

Nguyen Anh Thi, head of the management board of Saigon Hi-tech Park said the growth rate of added value in products made at the park was estimated at nearly 18% as of late 2020.

In the first 10 months of 2020, the combined value of technological products at the park was US$16 billion, accumulating  nearly US$81 billion as of present.

Saigon Hi-tech park targets to have total investment capital of nearly US$11 billion by 2025, localization rate of 35%, and export value of US$30 billion, representing a growth rate of 10% per year.

Amid the Covid-19 pandemic, the hi-tech park has played a pioneering role in developing Covid-19 vaccine and putting Vietnam among a handful   of countries having the capability to self-produce vaccine in the future.

As HCMC enters a new development period in 2020-2025, Thu Duc city would stay core in an overall effort to turn the city into a regional financial hub. 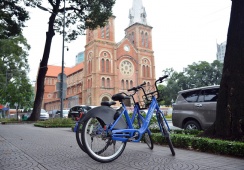 HCM City to try out public bicycle system from August 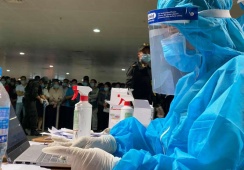 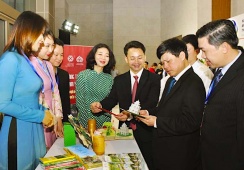