Thanks to improved quality and higher demand, Vietnam’s rice export prices are set to be higher than the same period of last year. In terms of quantity, it is likely that there will be a year-on-year growth due to the opportunity of exporting to new markets, according to Viet Dragon Securities Company (VDSC).

In the first half of this year, rice exports jumped 18.6% year-on-year to US$1.71 billion, according to the General Department of Vietnam Customs.

Meanwhile, the export volume increased by 5% year-on-year to 3.5 million tons and the average export price jumped by 13%, reaching US$488 per ton.

The US Department of Agriculture predicts that the Philippines will have to import approximately three million tons of rice (a slight increase of 3% year-on-year) in the 2019 – 2020 period. That amount will help  fulfill the domestic demand as local supply is estimated to meet only 77% of total national demand (14.3 million tons).

Due to the relatively high price of Thai rice and interruption in the Indian logistic system, a result of the lockdown to control the Covid-19 pandemic, Vietnam has increased its exports to the Philippines. Exports to that country climbed by 13% year-on-year to reach 1.4 million tons.

Additionally, China also increased its imports from Vietnam as the quantity increased by 59% year-on-year to 458 thousand tons. One of the reasons was a decline in China's domestic rice production (forecast to drop by 1.8 million tons, to 146.7 million tons). Moreover, China has also raised its inventories due to the pandemic.

Overall, VDSC mentioned two other reasons that helped Vietnamese exports: (1) Vietnamese rice image is gradually improving- less pesticides on rice and the advent of the rice strain ST25: “The best rice of the world in 2019”. (2) Vietnam tended to export more high-quality rice as the premium rice accounted for over 60% of total exports, much higher than 10% ten  years ago.

Fiercer competition in second half

In addition, the EU will put a 0% tax on broken rice without quota (which is expected to help Vietnam export about 100,000 tons to the EU each year). Also, the EU committed to bring the tax rate to 0% after 3-5 years for rice products. Vietnam’s export volume to the EU in the first half was 13.4 thousand tons, so the remaining in the quota is 66.6 thousand tons (83%).

In the discussion with South Korea, the EU agreed to allocate 20,000 tons of rice to five WTO partners (including Australia, the United States, China, Thailand and Vietnam). South Korea offered a quota of 55,112 tons of rice to Vietnam. In the first half, Vietnam has not exported rice to Korea, so the remaining capacity for the rest of the year is significant.

However, in India, the rainy season has provided a large amount of water and the government of India increased the purchasing price of rice. Thus, rice production in India is ample. Indeed, the US Department of Agriculture forecasts that India's export volume in 2019/20 will reach 11 million tons (+12% year-on-year).

In addition, the competition from Indian rice is now very high as the Indian rupee has been weaker, making their offered price much lower than Vietnam and Thailand prices. 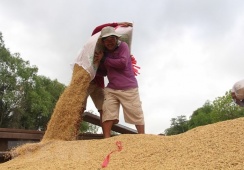