The development of the tube houses' unique architectural style in Hanoi’s Old Quarter can be traced back to expensive land prices.

According to Amanda Goh, the writer staff of insider.com, Hanoi streets attract visitors for its special architecture that cannot find elsewhere in the world: the ‘tube house’ or “nha ong” as called by local people.

“The streets of Hanoi are lined with tall, narrow ‘tube houses’ that can be less than 20 meters wide and up to 12 floors tall,” he wrote.

Amanda quoted Dinh Quoc Phuong, from the Interior Architecture Program at Swinburne University of Technology saying that “while the old tube houses, which were built in Hanoi before 1954, usually have two floors with narrow frontage, the new ones are much higher, up to 12 levels on the same building footprints as the old tube houses”.

It seems that the economic characteristics of Hanoi’s Old Quarter determine its unique traits of architecture. According to Insider, Hanoi’s Old Quarter neighborhood used to be a trade and commerce hub. Each street is named after the respective wares that used to be sold along with it, such as Hang Bac (Silver Street), Hang Chieu (Rattan Mat Street), and Hang Gai (Silk Street), among others.

“Unlike newer tube houses, which are purely residential, many of these older homes in the Old Quarter continue to serve a commercial function. With multiple levels of living space available, these residences can house multiple generations under the same roof,” it wrote.

Mai Hung Trung, from Hanoi Ad Hoc- a group of experts dedicated to the study of Hanoi’s urban landscape- told Insider that “the traditional tube houses used to be a shared house between many families.”

“There could be up to five, six families living together. And until now, in the Old Quarter, you can still see different families cohabiting in one house,” he said.

According to Mai, there are numerous theories regarding the origin of these tube house design. “For one, the architectural style could have evolved due to expensive land prices,” he stated.

In the inner city, land is actually gold. “As an indicator of price, the street front is considered as important as land size,” he added.

The fact is that despite the strange shape, the Hanoians still arrange their tube houses skillfully, meeting the diverse needs of their daily life.

“A typical French-style old tube house in Hanoi is often divided into many small spaces, including the store in front of the house; an area for ancestral worshiping, a living room, bedrooms on the second floor, and a void for owners to unwind in their own home,” Nguyen Van Du, a resident in Hanoi’s Old Quarter area told The Hanoi Times.

According to architect Hoang Dao Kinh, the old tube houses in Hanoi’s Old Quarter area have a very consistent architecture. “Usually, the front of the house is a place to sell goods, and then, the living room. The void is in the middle of the house that allows light and air to get in; then, the kitchen-cum-dining room and toilet. The entire second floor of the house is for resting,” he said.

Thanks to such consistent architecture, the tube houses, although narrow, can still allow their dwellers to ‘breathe’.

“In addition, the old tube houses are often roofed with traditional tiles that while ensuring the protection from sun and rain, allow air to flow through small clefts. “Moreover, the walls are plastered with a traditional mixture of sand and molasses, which is completely eco-friendly and very breathable,” he added.

Some typical tube houses that still retain this unique architectural mark are the Heritage House at 87 Ma May Street, the old house at 42 Hang Can and 12 Hang Buom Streets, and the garden house at No 115 Hang Bac Street, among others. 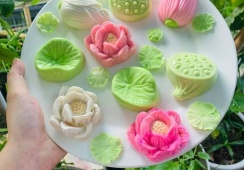 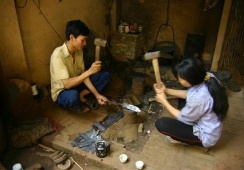 Keeping the fire of blacksmithing