Lang Ha street: Trace of the old days within modernity

The Hanoitimes - The bustling street, however, features its own mysteries that might impress people once they are unveiled.

Outsiders passing through Lang Ha street might be impressed by its modernity with hotels, high rises and illuminated street stores  on its two sides. The bustling resident area, however, features its own mysteries that might impress people once they are unveiled.

Located  to the west of Hanoi’s downtown, Lang Ha street is among the most beautiful of the capital, with a row of green trees in its median strip and busy street stores on its sidewalks. It is also an important road axis of Thanh Cong and Lang Ha wards in the two urban districts of Ba Dinh and Dong Da.

The traces of the old days

For just dozen decades ago, Present-day Lang Ha street was still located within the two ancient villages within Hanoi. The street passed through the old lowland of Thanh Cong village and Lang village, both outside the La Thanh dyke. Among these two villages, Thanh Cong village was originally a ward of mandarins under the late Le dynasty (1427-1789) and the Nguyen dynasty (1802 to 1883).

Lang Hạ village is one of three villages of Thuong, Trung, and Ha (Up, Middle and Low Lang) forming Yen Lang farm of Vinh Thuan district in the old time. By the end of the 20th century, this farm’s residents still lived mainly by growing vegetables and fruits and was famous for specialties such as onion or Lang basil which is an important ingredient of Pho, the typical dish of Hanoi.

Nowadays, besides the high buildings, people still see many traces of the Buddhist and spiritual architectures of Champa from the Ly, Tran, and Le dynasties in temples and pagodas on the present-day Lang Ha street. Some of the typical evidence is the gate of Thanh Cong village, at the beginning of alley 12 of Lang Ha street and the nearby communal house.

The Ung Thien Temple is located at Lane 151, on the east side of the street, just 50 meters away from the sidewalk. Meanwhile, Hau Tho communal house  is located in the north of the street to worship the Goddess of the land. In addition, on the old land of Lang Ha village, there are other relics such as Dai temple, Vo Vi temple and Man Khat Khap Tu pagoda. Those are the cultural values that today Hanoian need to preserve for their next generations.

The area of the Thuong and Trung Lang villages has now been urbanized with apartment buildings erected. Since late 1986, when the urbanization of Hanoi accelerated, skyscrapers for banks, hotels, research institutes, schools and hospitals have been built on the two sidewalks of Lang Ha street. The two sides of this street are apartment and office buildings of Thanh Cong, Railway, Post Office, PVC Hong Ha Energy, among other as well as an embassy and a four-star-hotel.

The street also runs through Indira Gandhi Park (also known as Thanh Cong Park), located opposite the National Cinema Center at 16B, Lang Ha Street, Ba Dinh District, Hanoi. Named after India's first female prime minister - Indira Gandhi, there is a statue of hers on the north side. It’s a fine art statue, overlooking the main gate to the street.

On Lang Ha street, there are also some important constructions such as the National Cinema Center and the US Embassy. Recently, a lane of Lang Ha street became a bus only lane for Hanoi’s first Bus Rapid Transit (BRT). In addition, there are currently three bus lines on this street, including 9B, 18, 49.

This street is always full of traffic movement from morning to night. In 2017, to reduce traffic jams, an overpass was built. The overpass is 220 meter long, and wide enough for three lanes of car (9 meter), with a cost of approximately VND150 billion (US$6.4 million) and was completed after four months of operation.

Old features intermingling with new ones are the typical characteristics that make Lang Ha become one among the most interesting streets within Hanoi capital. 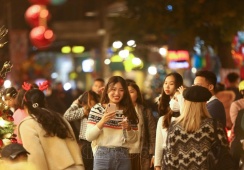 Hanoi streets sparkle ahead of Christmas 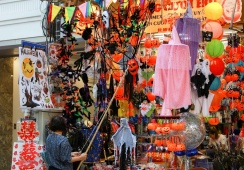