Legal gaps must be removed for better rooftop solar power in Vietnam: GIZ

Good policy for all stakeholders will enable Vietnam to continue its sustainable energy transition in the coming decades.

Vietnam Electricity (EVN) said it would halt all activities relating to the installation and purchase of rooftop solar power after December 31, 2020. The move has triggered concerns among developers on the continuity of policies applied for this electricity segment.

Ms. Vu Chi Mai: It’s time for Vietnam Electricity (EVN) to make the announcement as it needs to follow the government’s Decision 13/2020/QĐ-TTg that took effect on May 22, 2020. In addition, there’s no more valid documents guiding the installation and purchase of rooftop solar power after the time that enable EVN to continue the process.

It also means that businesses have been informed of the due date. EVN’s move will facilitate the operations of ongoing projects while waiting for the enforcement of new legal documents.

From GIZ’s perspective, it’s necessary to avoid legal gaps that might disrupt investment in renewable energy in general and rooftop solar system (RTS) in particular.

We hope that relevant agencies in Vietnam will soon have policies on rooftop solar that are expected to take effect from January 1, 2021.

It should be noted that rooftop solar is considered one of main sources for Vietnam’s energy transition in the future in terms of investment and further domestic engagement (more parts in the system shall be produced in Vietnam, more jobs shall be created). Therefore, the Vietnamese government should consider issuing policies to sustain this energy segment, for example feed-in-tariff (FIT) and self-consumption mechanisms, including electricity offsetting to reduce the pressure on distribution grids.

2/ According to EVN, half of some 50,000 operational rooftop solar system capacity 1,200 MWp was installed in the first eight months of 2020.

Industry insiders revealed that the installation prices have dropped by half in the last three years to VND14-VND18 million (US$608-US$782) per kWp now and this has prompted increasing demand.

How do you think about the sharp increase of installed capacity in a short period of time? Is installation price the reason?

Mr. Nguyen Anh Dung: As per GIZ’s experiences on supporting the policy making on renewable energy, it’s hard to predict market reactions against the policies, mostly in emerging markets like Vietnam and in the context of technology prices of solar PV which have considerably decreased in the recent years. Those happened to rooftop solar power show no exception.

In fact, investment cost for rooftop solar systems has dropped over the past time, resulting huge private sector’s interest in this segment. And in terms of mobilization of crowdfunding to contribute to the national energy security, it could be seen as a big success with high participation of households and private companies. Moreover, from policy maker’s perspective, I am very happy to experience this amazing public awareness of renewable energy as well. Renewable energy is not only for rich people anymore.

For sustainable development of Vietnam, it’s necessary to seek and use renewable sources in the most efficient and effective manner.

However, as in many other countries, FIT mechanism have resulted in inward investment in Vietnam and the participation of all stakeholders regardless of private investors, domestic commercial banks, and authorities, forming firm basis for the development of renewables in the future.

Experiencing the recent development of RTS, we learn that if the policy is right, huge public fund could be called for investment. It also proves that rooftop solar power remains one of key sectors in Vietnam and draws further investment if policies are proper and equal for all stakeholders. This is a very good starting point for Vietnam to continue its sustainable energy transition in the coming decades.

You please talk about the guidelines to let us know how meaningful it is?

Mr. Nguyen Anh Dung: GIZ has released the guideline on commercial-industrial rooftop solar systems in Vietnam in partnership with EVN and some project developers with an aim to provide comprehensive instructions on investment into RTS to meet the rising demand for it.

This guideline is expected to bring factual, practical and up-to-date information to developers or investors of commercial or industrial rooftop solar systems. It also gives an overview and prospect of rooftop solar market in Vietnam.

The guidelines also describe all critical steps of RTS project development, and provide practical tips and insights based on the experience of companies in Vietnam that have developed rooftop solar projects in the past.

It should be noted that the document is for information purposes only, and the users appreciate that regulations, legislation or procedures do change, and may be subject to interpretation, and different application. Do not rely on the information in this document as an alternative to legal, technical, financial, and/or taxation advice.

4/ Mr. Sven Ernedal, Project Director of the Renewable Energy and Energy Efficiency (4E) Project in Vietnam, expressed hope that solar energy would be a reliable, affordable and sustainable energy source for industry and commerce in Vietnam. Could you share about GIZ’s 4E Project and the role of renewable energy in Vietnam’s power mix?

For that reason, GIZ’s support is aimed for Vietnam’s successful process. Through the Energy efficiency and Renewable Energy (4E Project) under the Energy Support Program (ESP), we are supporting the policy making and sustainable energy transition in the country.

The world’s energy transition is obvious and indispensable with two processes including one from fossil fuel to renewable energy in power industry and from fossil fuel to electricity in other industries. A number of countries have followed that journey to obtain net zero emissions by 2050 with the high ratio of solar and wind power. Vietnam will not be out of the path.

Thank you so much! 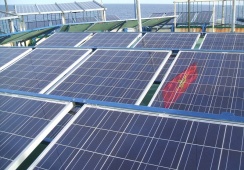