The Hanoitimes - Vietnam is estimated to need at least US$7-US$9 billion of investment in LNG import infrastructure.

Liquified natural gas (LNG) energy in Vietnam is estimated to account for 12% of the country’s power generation capacity by 2030, or 17 gigawatts, according to Deputy Prime Minister Trinh Dinh Dung.

Power demand in Vietnam grows 10% annually on average and the country is pursuing the energy transition in which LNG power and renewable energy will be prioritized over coal-fired power, Dung said at a meeting on February 11 with investors from the US and South Korea.

At the meeting, the deputy PM said Vietnam has welcomed and facilitated foreign investment in the LNG sector.

Based on the current outlook for domestic production, Vietnam will need to import significant volumes of LNG beginning within the next 5-10 years, necessitating at least US$7-US$9 billion of investment in LNG import infrastructure, according to the World Bank.

The Vietnam’s Ministry of Industry and Trade estimated that the country’s imported LNG volume will be 5 million, 10 million and 15 million tons by 2025, 2030 and 2035, respectively.

According to the World Bank, the primary issue is how to establish appropriate pricing structure to integrate the new gas/LNG supply. Other issues include ensuring government support for new gas projects, and ongoing investment in infrastructure and business development models.

To help the country proceed with its energy transition process, the World Bank has identified the key constraints on mobilizing investment in LNG-to-power, namely: a) lack of a modern regulatory and planning approach; b) lack of a bankable integrated commercial framework for LNG-to-power; and c) limited government experience with managing LNG pricing and volume risks. 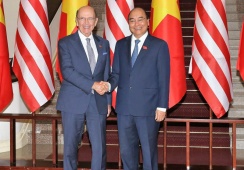