The Hanoitimes - Revered by Hanoians, Long Bien Bridge is living historical evidence of the courage of the capital throughout the ups and downs of the 20th century.

‘The horizontal Eiffel Tower in Hanoi’

Works on the bridge began in 1899 and when completed, in 1903, it was named after Paul Doumer, the French Governor General of Indochina. Visitors walking through the bridge could still see a metal plate attached to the truss which reads “1899 -1902 ~ Daydé & Pillé - Paris”. This is also the first steel bridge built across the Red River.

Long Bien Bridge is a reminder of French technological innovation at that time. Under the guidance of French experts, over 3,000 Vietnamese workers undertook the challenge of building the bridge, using up to 30,000 cubic meters of stones and metals, including 5600 tons of rolled steel, 137 tons of pig-iron, 165 tons of iron and seven tons of lead. The total cost of the bridge was up to 6,200,000 French francs at that time (roughly USD70 million today). Long Bien bridge construction period was originally planned to last 60 months, but it was completed in 45 months later.

According to the design of the French contractor Daydé & Pillé Company, the bridge’s length is 2290 across the river and 896 meters of stone approach roadway. Its 19 spans placed on 20 pillars in 40-meter-high (including the abutments). The single-track railway bridge runs in the middle while two side paths are used for motorbikes and bicycles (about 2.6-meters wide) and pedestrian way (about 0.4-meters wide). The direction on the Long Bien Bridge is left-hand traffic, instead of right-hand traffic like other bridges, meanwhile, cars are banned on the bridge.

The Long Bien bridge was almost destroyed by the US bombings during the years from 1965 to 1968, and in 1973 it was rebuilt.

In its more than 100-year history, Long Bien Bridge was once the second longest bridge in the world (just after the Brooklyn Bridge spanning the East-River in the US). It is even known as “the horizontal Eiffel Tower in Hanoi”.

The iconic French-built bridge has still remained an important part of daily life for residents of the capital. Teenagers, expats and tourists alike love to walk across it on the weekend, buying boiled glutinous corn or charcoal-grilled sweet potatoes.

The bridge is also the best place in town to watch the sunrise or sunset. Many brides and grooms as well as hip young local people choose Long Bien Bridge as the backdrop for their photos. In the afternoon, people in Ngoc Thuy village and Ngoc Thuy ward pick up fresh vegetables or fish for dinner from the small open-air afternoon market on the bridge.

Through many ups and downs of history and time, the bridge is seriously deteriorated. There have been several proposals put forward recently to modify and modernize the bridge, so that the city can tackle the increasing amount of traffic between the districts of Hoan Kiem and Long Bien.

The most notable project is the one titled "Conservation, Renovation and Development of Long Bien Bridge" which has been cherished for more than 10 years by French- Vietnamese architect Nguyen Nga. In 2019, this project was officially released in Hanoi, with the help of the Association for Liaison with Overseas Vietnamese (ALOV).

“Regarding the Long Bien bridge, the Prime Minister totally agreed to support Mrs. Nga’s initiative on the bridge restoration. He assigned the Government Office and the People's Committee of Hanoi to discuss with Mrs. Nga and relevant agencies on the restoration. The Prime Minister requested the Vietnamese Ambassador to France to seek French support for the works and asked architect Nguyen Nga to mobilize capital sources to support the project,” Mr. Binh said. 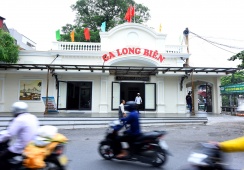 Long Bien Railway Station - a tourist attraction after being renovated