The punishment aims to promote transparency and public trust in the political system.

The Communist Party of Vietnam (CPV) has punished more than 131,000 members, who violated anti-corruption regulations, in the 2013-20 period in an effort to promote transparency and public trust in the political system.

The figure was released at a national meeting held in Hanoi on December 12 chaired by the CPV’s General Secretary and State President Nguyen Phu Trong.

The meeting, reviewing the anti-corruption in 2013-20, was participated by nearly 700 representatives of the Party, State, Government, National Assembly and ministries, and centrally-governed cities, and the online attendance of nearly 5,000 representing localities nationwide.

The year 2013 marked the establishment of the Central Steering Committee for Anti-Corruption chaired by the party chief. Since then, the combat against corruption has been more effective, gaining more “public support” and “international recognition”.

The results have showed the party and state’s determination on fighting corruption with an aim to make no exceptions, including senior officials.

Authorized agencies have proposed to revoke embezzled assets worth VND700 trillion (US$30.43 billion) and more than 20,000 ha of land. 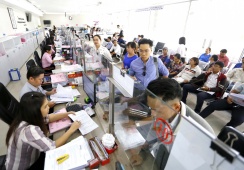