New support package worth up to US$884 million on the cards: Finance minister

Vietnam would accept a higher level of fiscal deficit to continue providing support for businesses.

The Government is considering a support package under the form of lowering interest rates for businesses in certain fields with sizes of VND10-20 trillion (US$442-884 million).

Minister of Finance (MoF) Ho Duc Phoc shared the news with local media on the sidelines of a discussion session at the National Assembly (NA) on October 28, noting other economic stimulus packages are under discussion.

According to Phoc, to further increase state budget revenues, the authorities would focus on industries of high potential, especially those in the digital platform as online shopping, as well as stepping up efforts in addressing transfer pricing and other tax evasion and tax avoidance practices.

“Tighten spending is also a key solution,” Phoc said, adding the Government expects to cut 10% in regular spending and another 5% in allocation for holding conferences or meetings.

The minister noted the resolution of the 13th National Party congress targets a fiscal deficit of 3.7% of the GDP in the next five years.

“Given the severe economic hardship, however, it is imperative to continue providing supporting packages for enterprises and boosting economic growth, or to say to accept a higher level of fiscal deficit,” he added.

Once the economy is stabilized, Vietnam would reduce the fiscal deficit, he added.

Meanwhile, President of the Vietnam International Arbitration Center (VIAC) Vu Tien Loc expected upcoming supporting programs from the Government should be able to act as a “lifeline” for businesses and stimulate new driving forces for growth.

“To ensure efficiency in economic recovery, Vietnam is in need of a short-term recovery plan for the 2022-2023 period,” Loc said.

Along with fiscal and monetary supports, Loc suggested the Government consider a special mechanism in realizing administrative procedures for businesses towards greater simplicity, lowering the frequency of inspection, to ensure a favorable business environment for business operations.

“Every inspection process should be conducted after the process, not prior to it, along with a stronger push for administrative reform and cutting expenses for businesses,” Loc said.

During a discussion session, the Chairman of the NA Committee on Finance-Budget Nguyen Phu Cuong noted any support programs offered by the Government should be big enough to support economic recovery.

“Businesses and people affected by the pandemic need the Government support to better cope with the pandemic situation and later to recover,” Cuong said. 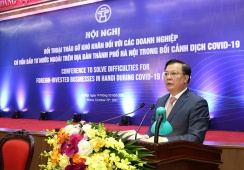