The new delicious creations of Banh Chung or Vietnamese traditional cake for Tet has won the hearts of culinary connoisseurs.

Amid socio-economic development, traditional food is still kept and enjoyed. In addition, there has been renovation and creativity based on the tradition for new delicious dishes that are welcome. Banh Chung (traditional rice cake made of glutinous rice, green bean and pork), a symbol of food during Tet (Lunar New Year Festival) is one of them.

“No fat” is the attractive marketing of brown rice Banh Chung for which many people “hunt” for it this Tet. Made in the same way of  making traditional banh chung, the only difference of this cake is brown rice, instead of the traditional white one.

Brown rice not only brings a new brown color to the traditional green cake but also contains substances good for health, suitable for those with diet, diabetes or problem with heart and blood pressure.

It is soon favored by diners as people can both enjoy the traditional food and eat healthy. Furthermore, many people are also interested in purchasing to taste the new flavour of the cake.

The order of the cake increases day by day as Tet arrives closer and closer. Some places are in the shortage of supply.

It is the first-ever Tet traditional rice cake with fish, instead of pork as usual.

Moreover, it is salmon, which is usually known for its imported origin, bringing a touch of international exchange and culinary combination in the cake. It is also considered the most expensive Banh Chung with VND500,000-600,000 ($22-26) a pair while the average price of traditional Banh Chung varies among VND55,000-100,000 ($2.5-4.5)

Along with traditional ingredients such as white glutinous rice, green bean, pepper and la dong (Phrynium leaves), green tea powder is also added to reduce the strong smell of fish. It has caught the attention and curiosity of many people to taste and present to others as a unique gift.

This is exactly the same ingredients of traditional Banh Chung, except for its multi-color. It includes five separate layers of colors representing earth, water, fire, wood and metal which are believed to bring peace, prosperity and luck for the New Year in Oriental culture.

Depending on the taste of the maker, the five colors of the cake are varied. However, the most common ones include red, green, yellow, white and purple. To create the different colors of the cake, rice should be dyed, with natural ingredients, for example, the red coming from Gac (perennial melon), yellow from ginger or purple from black rice.

To prevent the colors from mixing together when the rice is wrapped  in the leaf, the cook dyes the rice separately in five moulds, thus the elaboration of this Banh Chung is more time consuming.

Having the same look as a traditional Banh Chung, but Banh Chung Com has a different soft and unique taste, thanks to the addition of com (young green rice), a typical delicious ingredient which is used a lot to just eat right away or to make glutinous rice cake, sticky rice, sweet desserts, candy, ice-cream, among others.

More interesting, Banh Chung Com has two kinds, salty as usual or sweet, which both come with meat, offering more options for diners.

In the past when people were  poor and short of food, especially meat, Tet was the occasion to feast and enjoy the food which came with meat. However today, as life is getting better and food is abundant, meat is no longer the dreamt food, especially for vegans whose number is on the rise. 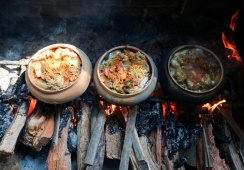 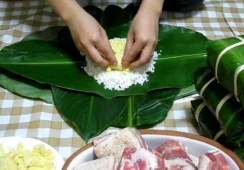 Nostalgia of overseas Vietnamese at Tet