The Vietnamese government targets economic growth of 2% to 3% in 2020, 6% in 2021, however, it remains quite modest compared to positive assessment from international organization and experts on the country’s economic outlook, according to economist Nguyen Minh Phong.

The World Bank in its monthly macro-economic report in released in October stated Vietnam’s economic recovery appears to be firming up and becoming more broad based, while inflation could be tamed under 4%. GDP growth could reach 2.5– 3.0% in 2020.

Meanwhile, the International Monetary Fund (IMF) in its latest World Economic Outlook report expected Vietnam’s nominal GDP to reach US$340.6 billion in 2020, ranking fourth in Southeast Asia and overtaking Singapore (US$337.5 billion) and Malaysia (US$336.3 billion).

In the region, Vietnam’s economy size is behind Indonesia with US$1.08 trillion, Thailand (US$509.2 billion) and the Philippines (US$367.4 billion). Additionally, the country’s GDP per capita would be nearly US$3,500 and remain sixth among ASEAN countries, and could rise to US$5,211 by 2025.

According to Mr. Phong, Vietnam’s mid- and long-term economic prospects continue to be positive thanks to being a party to a large number of bilateral and multilateral trade agreements.

The economist added the country is also among major beneficiaries from the current shift in global investment capital.

ADB Country Director for Vietnam Andrew Jeffries expected Vietnam’s economic growth will be resilient in 2020, in large part due to the government’s success in controlling the spread of Covid-19.

Amid a generalized downtrend in the third quarter, new Global Trade Update report from the United Nations Conference on Trade and Development (UNCTAD) informed Vietnam posted the highest trade growth globally during the period at 10.9% year-on-year.

Vietnam, along with China and Taiwan (China), three economies with highest export growth during the July – September period, are among a handful of economies that have brought the spread of Covid-19 under control early on.

Despite positive assessment, the ADB said a prolonged global Covid-19 pandemic is the biggest risk to Vietnam’s growth outlook this year and next year. Another threat is global trade tensions, which lead to rising trade protection and financial risks that could be exacerbated by a prolonged pandemic.

A report from Standard Chartered predicted Vietnam to achieve growth of 3% in 2020 and 7.8% in 2021. Standard Chartered’s economist Chidu Narayanan asserted that Vietnam’s could step up production, trade, public investment and domestic consumption in the final quarter of 2020.

However, private investment may not recover as expected, due to the concern about lower demand in mid-term. Foreign direct investment (FDI) commitments for new projects in Vietnam could reach US$13 billion in 2020, a decline compared to last year but is still acceptable given the dim global outlook, stated Mr. Phong.

The ASEAN Post reported the Vietnamese government has been providing measures to freeze and waive taxes as well as land rental fees for enterprises. The Investment Law has also been revised to simplify administrative procedures and create more favorable conditions for the FDI.

Overall, despite numerous challenges due to high economic openness and growing global uncertainties, Vietnam’s economy still maintains its resilience and is on track for a V-shaped recovery.

This comes on the back of consistent economic measures and driving forces from 2019; the country’s success in controlling the Covid-19 pandemic; speedier disbursement of public funds; improvements in the business environment; deep integration in global value chains; digital transformation among the business community; among others.

In the coming time, Mr. Phong expected Vietnam to have more drastic measures to support the economy, focusing on three major contributors which are investment, exports and consumption. 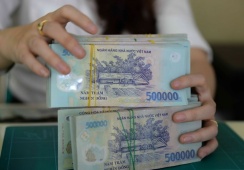