Panasonic to move appliance production from Thailand to Vietnam

The Hanoitimes - The plant, located outside Hanoi, would be the company's largest manufacturing hub for refrigerators and washing machines in Southeast Asia.

Panasonic will shut down a large appliance factory outside Bangkok as early as this fall and consolidate production to a larger facility in Vietnam for greater efficiency, Nikkei reported.

The Thai plant will stop producing washing machines in September and refrigerators in October. The building itself will be closed by March 2021, and a neighboring research and development centered will be shuttered as well.

With the move to Vietnam, Panasonic seeks to reduce costs through consolidating parts procurement.

The Vietnam plant, located outside Hanoi, is the company's largest manufacturing hub for refrigerators and washing machines in Southeast Asia and has excess capacity, added Nikkei.

Later, production shifted to countries like Thailand, as Singapore's wages grew to be too expensive. Now companies are looking for even cheaper locations, while also hoping to tap the massive potential demand for refrigerators, washing machines and microwaves in the largely populated countries of Southeast Asia, such as Indonesia, the Philippines and Vietnam.

Panasonic had been producing large household appliances in Thailand since 1979.

In recent years, multinationals like Samsung, LG Group, and a plethora of Japanese manufacturers have been moving factories from China and other countries to Vietnam.

VinaCapitla in its report stated the view that the Covid-19 pandemic will ultimately benefit Vietnam’s economic prospects by accelerating companies’ efforts to re-locate production to the country.

“FDI companies will be prompted to not only continue establishing new factories in Vietnam, but to also start imbuing local suppliers with much more technical and operational expertise in order to support the production of those multinationals in Vietnam,” stated VinaCapital. 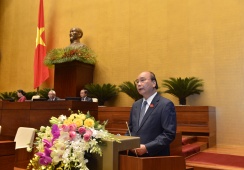 Vietnam needs to get ready for capital flight from China: PM