The Hanoitimes - Sauce is a staple of almost every dish in Vietnam. A Vietnamese meal without particular sauce is considered incomplete.

‘The food’s ready! Where’s the nuoc cham?’ my sister called out as we were ready to serve our family dinner but had forgotten the nuoc cham (dipping sauce). ‘Take it easy, we only need four sauces for six dishes!’ I thought, but getting the nuoc cham ready was actually starting to drive me crazy.

Vietnamese can be fairly accommodating in the way they cook their food but fastidious in choosing the ingredients and the way the dishes are eaten. There is a strong philosophical basis to what is eaten and when, what ingredients go best together, and what type of nuoc cham or dipping sauce is to be paired with each meal. For example, cha ca (grilled fish) just can’t be eaten without mam tom (shrimp paste), rau muong luoc (boiled spinach stalks) must be accompanied by nuoc mam toi (fish sauce and garlic), while boiled duck goes with soy souce Tuong Ban (mixed soya sauce from Ban village with garlic and sugar).

With a smell that’s quite strong for the uninitiated, nuoc mam (fish sauce) is a defining national flavour. The inimitable Vietnamese fish sauce is obtained through the maceration of saltwater fish and their fermentation under sunny, natural conditions. The ingredients and climate are readily available thanks to the country’s lengthy coastline and tropical weather.

Anchovies and salt are layered in wooden barrels and then allowed to ferment for about six months. With its high amount of protein and iron, fish sauce is said to be very good for blood circulation. The light-coloured, first-drained sauce is the most desirable. A few spoonfuls over a bowl of plain rice can even be considered an authentic Vietnamese peasant meal.

The most popular condiment in a Vietnamese meal is nuoc mam pha, the very basic fish sauce, which is as common in Vietnam as ketchup is in North America, olive oil is in Italy, and red wine is in France. Nuoc mam is diluted with water, lemon juice, minced garlic, sugar and small slices of chilli pepper, making the sauce a little softer, subdued and more manageable on the palette.

Just as Westerners may be used to adding salt, pepper or condiments like ketchup, mustard or salsa to their meals, almost Vietnamese can’t even start to eat if there’s no fish sauce on the table. Tiny bowls filled with nuoc cham are found at every meal, and diners dip everything into it.

Nuoc mam pha can be used as a dip for spring rolls, as a dressing for noodles and rice, or as a marinade for grilled meat. When ginger is added it is perfect for boiled duck, while vinegar, lemon, garlic and onion are added for fried fish dishes, and a crushed hard-boiled duck egg may be added to boiled cabbage. Nem (spring rolls) require a very light sauce seasoned simply with vinegar, sugar and pepper, while banh cuon (plain or stuffed rice wrap) goes particularly well with a tiny bit of natural belostomid essence.

Mam tom (shrimp paste) is probably the most difficult Asian fermented seafood product for Western palates to accept. Though made in a similar manner to fish sauce, shrimp sauce is thick like toothpaste. The sauce may vary in appearance, from a pale liquid sauce to solid blocks, depending on the country. Vietnamese-style shrimp sauce is typically a light pinkish grey.

The raw materials for making mam tom can be shrimps, prawns or very small shrimps called Moi, with the latter preferred because of their high protein. After being caught the small shrimp are rinsed and drained before being dried. Drying can be done on plastic mats on the ground in the sun, on metal beds on low stilts, or by other methods.

After several days the shrimp-salt mixture will darken and turn into a thick pulp. If the shrimps used to produce the paste are small, it is ready to be served as soon as the individual shrimp have fully broken down. If the shrimps are larger, fermentation will take longer and the pulp will be ground to provide a smoother consistency.

The fermentation and grinding process is usually repeated several times until the paste fully matures. Shrimp sauce may be smooth or coarse, depending on the last step of the fermentation process. Mam tom is dried and then turned into a paste and cut into bricks or kept as a hard liquid.

Mom tom isn’t eaten straight out of the jar. A little bit is blended into food or made into dipping sauce, where it imparts an aroma and savouriness that deepens the overall quality of a dish. Central and northern Vietnamese cooks have a penchant for the sauce, and add it for a signature taste in classic dishes such as bun bo (spicy beef noodle soup) and bun rieu cua (fresh water crab noodle soup) or eaten raw with grilled fish.

Tuong Ban (soya sauce from Ban village) is a kind of fermented bean paste made from soybeans. Since long ago Tuong Ban has been an essential sauce in a family meal in the northern region of . March to August is the time it’s made, so expect to see hundreds of jars of diverse sizes filling the yards of many households in the countryside. Making soya sauce is not difficult but making Ban soya sauce is an art form.

To make the yeast, producer cooked the sticky rice then scattered them onto a large bamboo flat basket and dry it in an airy place for three days until the rice turns yellow. By the time, people can see a layer of the mould-green covering the yellow rice. Producer had to rinse out the mould-green then continue to let it ferment for seven to eight days. After this it is mixed with salt and left to dry for a month.

The soybeans, meanwhile, must be roasted until they are brown. They are then ground into small pieces and then soaked in boiled clean rainwater together with the sticky rice yeast in a terra-cotta jar for one week. After the beans have fermented, the producers add a little salt and more soybeans into the water and stir regularly. The sauce must be fermented on sunny days for three more months. 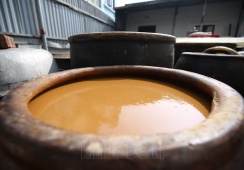