The Hanoitimes - Vietnam is one of South Korea’s key partners, especially when both are targeting US$100 billion bilateral trade in 2020.

South Korean Ambassador to Vietnam Park Noh-wan will work to atract larger investments from his country into Vietnam’s central region, which current accounts for 6% of total South Korean investment capital in Vietnam.

The Vietnam – South Korea business summit held on November 9 at the Chu Lai Economic zone in the central province of Quang Nam was a first step to develop the country’s central region under the bilateral cooperation framework, said Park in a meeting with Prime Minister Nguyen Xuan Phuc on November 22.

Park stressed Vietnam is one of South Korea’s key partners, expecting the relations between the two country to reach a new level, particularly as both are targeting US$100 billion bilateral trade in 2020.

Park revealed the combined volume of tourists between Vietnam and South Korea in 2019 is estimated at five million, with nearly 200 direct flights between the two countries per month.

At the meeting, PM Phuc said the bilateral relations are growing strongly in all spheres, adding he will lead a Vietnamese delegation to visit South Korea and take part in the ASEAN – South Korea summit.

Phuc expressed his support for South Korea’s New Southern Policy, and the government would continue to create favorable conditions for greater cooperation between the two countries in investment, trade, tourism, among others.

In the first ten months of 2019, Vietnam recorded a trade deficit of US$22.73 billion with South Korea, while the latter is Vietnam’s second largest import market during the period with a turnover of US$39.43 billion, up 0.5% year-on-year. 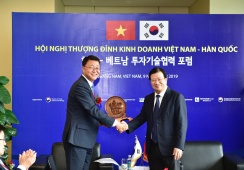 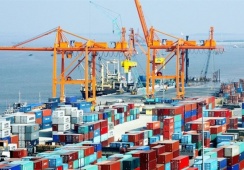