Southern region’s manufacturers in need of support to restore operations

Authorities in southern provinces have been supporting local businesses to resume their production in compliance with preventive measures.

Two leading provinces in the Southeast key economic region, Dong Nai and Binh Duong, are allowing production and business activities to resume after many months under Covid-19 restrictions. In less than a month, over 90% of enterprises have restored operations but their return to normal is facing obstacles.

The fact that many enterprises are authorized to take the initiative in drafting their own safe production plan has helped them start restoring and improving production capacity in the last months of 2021.

A series of companies with a large number of workers such as TeaKwang Vina Company in Bien Hoa 2 Industrial Park (IP), Chang Shin Vietnam Company in Thanh Phu IP, Vinh Cuu District, and Pou Chen Company Vietnam in Hoa An Ward, Bien Hoa City of Dong Nai Province have coordinated with the local authorities to lure workers back after many months under the social distancing regime.

The laborers are required to have negative results for Covid-19 before returning to the factory. They must also reside in the "green zone" or low-risk areas and be administered with at least one dose of Covid-19 vaccine 14 days before the reinstatement, or recovered from the disease 180 days prior.

As one of the first enterprises approved by the Dong Nai IPs Management Board to resume business, PouSung Vietnam is facing a huge shortage of laborers, Le Nhat Truong, Chairman of the Trade Union of PouSung Vietnam said the company is forced to train and re-arrange tasks and responsibilities appropriately.

Admitting there is a shortage of workforce, Le Van Danh, Deputy Head of the Dong Nai IPs Management Board, said to lure workers back to the province, businesses have offered many policies such as supporting their employee mobility, finding them accommodation, or giving them money.

In order to quickly recruit enough workforce to meet production demand, Dinh Sy Phuc, Chairman of the Trade Union of Taekwang Vina Industrial JSC in Bien Hoa 2 IP, Bien Hoa City, said that the company has aided VND2.3 million (US$101.9) for 12 months to each worker from Dak Lak Province returning to work. In addition, the company also supports transportation costs for employees to work in Dong Nai as well as seeks accommodations for them.

Binh Duong Province, another production hub of the south, is home to nearly 2,200 enterprises (accounting for 90.25%) with a total of nearly 410,000 employees (accounting for 85%) who has registered and operated under "three on-site", "three green" scheme.

In order to support businesses to restore normal and stable operation in the condition of “living with Covid-19”, the provincial authority has accelerated the vaccination campaign, with more than 150,000 workers being administered the first dose of vaccine and nearly 110,000 fully immunized.

In addition, 16 makeshift medical stations have been established and put into operation with 202 beds, 193 doctors, and health workers ready to support businesses in receiving, examining, and treating Covid-19 patients, said Bui Minh Tri, Head of the provincial Management Board of IPs.

Many foreign manufacturing and exporting enterprises have proposed to the Government and the Ministry of Transport to ease procedures for the entry of experts.

“In order to reduce difficulties caused by the impact of the Covid-19, the Government and relevant ministries should flexibly consider providing credit incentives with low-interest rates to offset costs, then reduce the burden on businesses, rescheduling debts and supporting loan interests for businesses,” Phan Thanh Duc, General Director of Binh Duong Garment JSC suggested.

Phuc from Taekwang Vina Industrial also suggested the Government deliver more support to workers as it is difficult for businesses to ensure their lives. Over the past two months, the company has earned almost no revenue since it had to shutter to ensure the prevention and control of the pandemic but still had more than 40,000 employees on the payroll. 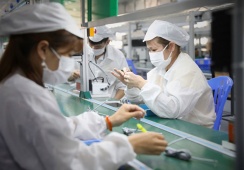 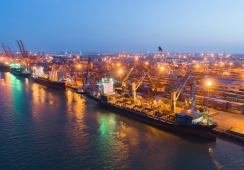