Positive budget collection during the first seven months is thanks to economic recovery from late 2020 to June this year.

State budget revenue in the first seven months of this year rose by 13.1% against the same period of last year to VND763.8 trillion (US$33.24 billion), or 68.4% of the year’s estimate, according to the General Department of Taxation (GDT).

Despite the current Covid-19 outbreak, the budget revenue saw a 3.2% increase year-on-year in July to VND104.4 trillion ($4.5 billion), noted the GDT.

“Positive budget collection during the first seven months was thanks to economic recovery from late 2020 to the first half of this year,” explained the tax agency, noting certain economic fields and sectors have enjoyed strong growth from the Government’s fiscal and monetary policies, including banking, securities, real estate, and automobile production.

According to the GDT, the majority of banks performed well in 2020 with rising revenue from banking services, high credit growth, and capital mobilization rate.

The stock market has also emerged as a steady source of revenue with a 2.5-fold increase year-on-year in tax payment, or VND3 trillion ($130.5 million).

The GDT attributed Government’s supporting policies for the automobile industry, including a 50% cut in the registration fee for domestically-produced cars, that have led to a doubling of car sale number in December against the same period of last year, and eventually a 47.1% increase in budget revenue from car sales, or VND11.2 trillion ($487.3 million).

Amid severe Covid-19 situation in a number of major economic hubs in the southern region, including the Ho Chi Minh City, Binh Duong, and Long An, the GDT is expected to continue supporting businesses through extending and waiving taxes and fees payment, aimed at sustaining long-term sources of revenue for the State budget.

“The GDT is expected to work with localities to step up efforts in tax management and prevent potential tax losses,” it added, especially from e-commerce and online businesses in Vietnam through multinationals such as Facebook, Google, Youtube, and Netflix. 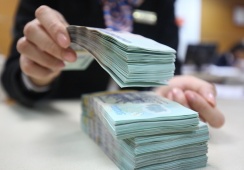