In the past five years, the application of technologies and new production methods helped Vietnam Cement Industry Corporation (VICEM) to record an annual increase of VND700 billion (US$30 million) in profit.

VICEM’s Board Chairman Bui Hong Minh made the statement at a recent meeting discussing the state-run firm’s targets for 2021.

“By the application of technological advancement, VICEM could now expand its production capacity by an addition of three million tons of clinker with minimum investment capital, in turn saving nearly VND6 trillion (US$258.3 million),” noted Mr. Minh.

According to Mr. Minh, to ensure green and sustainable development, VICEM has been pushing for a comprehensive restructuring and take on the circular economic model. “As such, the company was able to replace part of its input materials from natural resources, such as limestone or clay, with debris from other economic sectors,” he added.

“Following the restructuring plan for the 2019-25 period, VICEM is focusing on innovation to create new driving force for growth,” stated Mr. Minh.

Vice General Director of VICEM Dinh Quang Dung added in 2021, VICEM targets production of 22 million tons of clinker, up 1% year-on-year and 26 tons of cement, up 8%.

Under favorable conditions, the company sets a revenue target of over VND35 trillion (US$1.5 billion), up 7% year-on-year, and pre-tax profit of VND2.3 trillion (US$99 million), or an increase of 13%.

Vice Minister of Construction Nguyen Van Sinh said over the years, the government has been providing favorable policies for the development of construction materials, including cement. With the current production capacity, Vietnam is among the world’s top four largest cement producers, he said.

“In the coming time, VICEM needs to continue its role as the industry-leading firm and speed up the privatization process,” Mr. Sinh stressed. 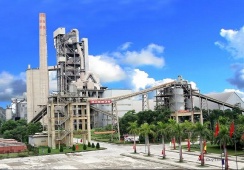