Hanoi to host gastronomy and tourism festival this month

A gastronomy and tourism festival will take place in Hanoi from April 16-18, introducing the city’s culture, cuisine and destinations.

The event will be jointly organised by Hanoi Promotion Agency (HPA)  and Hanoi Department of Tourism, offering many new tourism products and stimulus packages at a discount of up to 35%.

According to HPA Director Nguyen Gia Phuong, the festival will take place at the Ly Thai to monument area and neighboring streets with about 200 booths of provinces and cities nationwide introducing their tourism and local specialties.

During the festival, many cultural activities will be held to attract visitors, including folk dancing, art exhibition, among others. Some model of Hanoi’s iconic symbols such as the Temple of Literature, Imperial Citadel of Thang Long, among other attractions of the capital city will be installed around the Ly Thai to monument and Octagonal house.

In addition, the Organizing Committee will design an interesting space for the festival goers to take “check-in” photos with lilies - the typical flower of Hanoi in April.

Director of the Hanoi Department of Tourism, Dang Huong Giang, said that coming to the festival, visitors will have the chance to experience lots of cultural spaces as well as buying high-quality tourism products at reasonable prices offered by travel agencies.

This is also an opportunity for Hanoi to promote its beautiful image as a safe, friendly and attractive destination to foreign travelers and tourists from other localities.

One of the highlights at the festival is the event "Announcing domestic tourism products in 2021", which will be held by the Hanoi Department of Tourism on the afternoon of April 16. 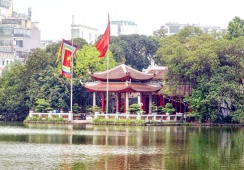