Thuoc Bac - a street with diverse colors of old Hanoi

Located in the Hanoi Old Quarter of Hoan Kiem central district, Thuoc Bac is one of the 36 old trade streets of the capital city. It is also a part of the city’s history in the early period of the resistance against the French colonialism and a destination for people who love Hanoi through the paintings "Phai Street” school.

In the old time, most of the sellers of these stores came from Da Nguu village in the northern province of Hung Yen, where specialized in the trade of Chinese traditional medicines.

The drug stores of that time were also simple. Baskets and trays of herbs were put right on the ground at the door step and inside the store. The herbs were left with the whole branch, roots, seeds, etc., bringing the pleasing herbal smell to the whole street.

Since 1945 when the country gained independence, all the five were merged into one, the Thuoc Bac street.

During the national resistance war against the French invasion 1946-1947, the street was a resilient and heroic front of the capital's army and people.

Together with Hang Vai and Hang But streets, it formed Dong Thanh self-defense front, which was the first capital protection layer. On January 16, 1947, people in Dong Thanh front fought courageously and shot down the first enemy plane here.

Today, Thuoc Bac is still a busy trading street with an interesting architecture, which are the mixture of old and new styles, including a number of Western-style houses built in the first half of the 20th century.

The trade of Chinese  herbalism in the street almost disappeared as it was moved to the nearby Lan Ong Street. The typical products offered on Thuoc Bac street are metalware such as locks, mechanical tools, safe deposit boxes, stainless steel for household use.

There are no ancient temples and pagodas in Thuoc Bac like some other touristic streets, but it houses a special place - the house of painter Bui Xuan Phai at number 87.

Bui Xuan Phai (1920-1988) is one of Vietnam’s most famous painters, who has great influences on the development of modern Vietnamese art. He is famous for his works on the Hanoi Old Quarter.

His own line of paintings called “Phai street” which portraits the soul of Hanoi's old town in the 1950s-1970s, has been long admired by the national and foreign public, especially those who fall in love with the old beauty of Hanoi.

His house on Thuoc Bac Street was also his studio, where he lived and kept his works. It has become a familiar meeting place for artists and people who love paintings and Hanoi.

This is also an interesting destination for tourists coming to Hanoi to learn about the city in the old time through these paintings. 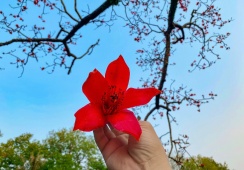