The Hanoitimes - Tourism venues in Hanoi shut down amid the Covid-19 outbreak.

Tourist attractions in Hanoi will remain closed until March 31 to ensure safety and for measures to be taken against the Covid-19 pandemic in accordance with the requests of the central and local governments.

Other tourist attractions are authorized to remain open provided that they apply disease prevention measures such as requesting visitors to wear face masks, providing hand sanitizer and checking their body temperature before they enter the ticketing area.

The Thang Long-Hanoi Heritage Conservation Center has also announced a temporary closure of the Imperial Citadel of Thang Long-Hanoi and the Co Loa Relic Site from March 14. The re-opening time will be decided by the municipal People’s Committee.

The Management Board of Huong Son Scenic Area and the People’s Committee of Huong Son commune (My Duc district) temporarily stopped welcoming visitors at the historic and scenic sites from March 15 to 31.

According to a report from the Hanoi Department of Tourism, bus services providers including Minh Viet, Quang An, Taserco and Phong Ha are operating at 40-60% of their capacities. They are facing numerous nullification of contracts as tours have been canceled. 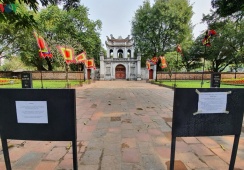