The Hanoitimes - The move is part of activities to enhance the defense ties in the course of China's militarization in the South China Sea.

US Defense Secretary Mark Esper said in Hanoi on November 20 that the US will transfer a second Hamilton-class High Endurance Cutter to Vietnam’s Coast Guard.

The delivery of the vessel – one of the largest class ships in the US Coast Guard's fleet – is a symbol of the comprehensive partnership between the US and Vietnam and will increase Vietnam’s maritime law enforcement and search and rescue capabilities.

Esper made the announcement during a speech Wednesday at the Diplomatic Academy of Vietnam, saying that it is a second high-endurance cutter to be handed over next year but giving no details on exact timing.

The move is part of the US commitment to expanding the strategic partnership by increasing cooperation in areas of common interest such as maritime security, peacekeeping operations, humanitarian assistance, and disaster relief, Esper said.

“This includes providing Vietnam the capabilities it needs to protect its sovereignty and natural resources so it can continue to thrive,” Esper said in a statement.

At a teleconference last month, US Coast Guard Commandant, Admiral Karl L. Schultz, said Vietnam Coast Guard will be equipped with additional 24 Metal Shark boats from the US.

Earlier in March, the US Embassy in Hanoi officially handed over six 45-foot Metal Shark patrol boats to the Vietnam Coast Guard (VCG) Region III in the central province of Khanh Hoa.

The purchase of the boats partly show the both sides’ efforts to tighten military ties agreed upon the 2011 Memorandum of Understanding on defense cooperation.

Reinforcing the defense ties was highlighted in the meeting between Esper and his Vietnamese counterpart Ngo Xuan Lich on Wednesday [November 20].

In the meeting with Vietnamese Prime Minister Nguyen Xuan Phuc on the same day, the two sides discussed measures to deepen the partnership which builds trust and mutual respect, creating harmony between the two people.

Phuc and Esper also emphasized a solid foundation of close clean-up dioxin contamination and to remove unexploded ordnance, along with Vietnam’s strong support for US personnel accounting activities.

Esper noted that the US have enduring strategic and economic interests in the Indo-Pacific region and a related commitment to its continued stability and prosperity. Vietnam and the US are connected by the Pacific Ocean, strong economic linkages, and Vietnamese-American familial ties.

This is Esper’s first visit to Vietnam since becoming defense secretary in July.

Vietnam is one of the most vocal critics of China’s sweeping territorial claims in the South China Sea and has strongly protested Beijing of encroaching into its waters. 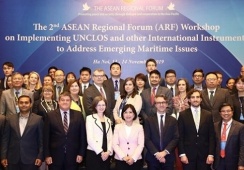 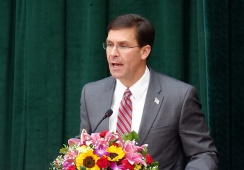