Vietnam bond market estimated at US$71 billion by Q1

On an annual basis, the bond market expanded 19.0% year-on-year in the first quarter of 2021, led by corporate bonds, which more than doubled during the quarter.

Vietnam’s local currency bond market slightly declined by 0.3% quarter-on-quarter to VND1,637.3 trillion (US$71 billion) at the end of the first quarter this year, reversing the previous quarter’s expansion of 8.1%, according to the latest edition of the Asian Development Bank (ADB)’s Asia Bond Monitor.

“The market contraction was due to lower outstanding government debt even as corporate bonds outstanding increased,” stated the report.

According to the ADB, government bonds accounted for a dominant share of Vietnam’s bond market at 82.1% versus corporate bonds with a 17.9% share. On an annual basis, the bond market expanded 19.0% year-on-year in the first quarter of 2021, led by corporate bonds, which more than doubled during the quarter.

In the first quarter, the government bond market contracted by 1.1% quarter-on-quarter during the January-March period, reducing the government’s outstanding debt to VND1,343.5 trillion (US$58.4 billion).

“A large volume of maturities was seen in government securities during the quarter, which was accompanied by low or no issuance across government bond segments,” noted the bank.

Insurance firms and banks together held nearly all government securities outstanding at the end of December 2020, accounting for a combined share of 99.3%.

The remaining outstanding bonds were held by security companies, investment funds, offshore investors, and other investors. Foreign investors held 0.6% of government securities at the end of December 2020, which remained the smallest foreign holdings share among all emerging East Asian economies, noted the ADB.

In contrast, corporate bonds posted growth of 3.3% quarter-on-quarter in the period, lifting the total outstanding amount to VND293.7 trillion (US$12.76 billion) at the end of March.

The increase, however, was slower compared to the growth of 13.5% in the previous quarter. The slowdown in growth can be traced to lower issuance volume from the corporate sector due to regulations that raised standards for corporate bond issuance to promote transparency and fairness in the market, stated the ADB.

The aggregate bonds outstanding of the top 30 local currency corporate issuers amounted to VND199.9 trillion (US$8.68 billion), or 68.1% of the total corporate bond market, at the end of March. 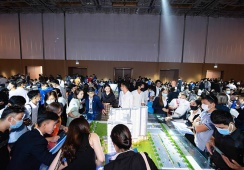