The Hanoitimes - The national conference between Prime Minister Nguyen Xuan Phuc and the business community on May 9 would further help accelerate enterprises’ recovery.

In face of severe damange of the Covid-19 pandemic, the Vietnamese business community has shown its adaptability to maintain operations and ensure job security.

The pandemic has caused disruptions to global supply chains and trade flows, and sunken major economies such as the US, China, Japan and the EU into recession.

During this circumstance, local enterprises, especially those operating in the fields of tourism, aviation, education, hospitality and catering services, have been directly hit by the pandemic and forced to suspend operations for almost three months.

Moreover, enterprises are facing mounting difficulties from shortage of input materials to a plunge in orders from key export markets. The issue is particularly significant for industries deeply integrated in global supply chains, such as textile, footwear, electronics and smart phones, among others.

Revenues of enterprises in the first quarter suffered a sharp decline of nearly 26% compared to the same period last year, while the rate for the four-month period is set to rise to nearly 30%.

One of the most challenging issues for enterprises are the lack of capital, especially working capital, with the agro-forestry-fishery sector having the highest number of enterprises falling short of capital.

To cope with the situation, enterprises have set up a range of measures, from flexible working hours; streamlining operational costs; searching for alternative input sources and new markets; shifting priority to domestic market; to applying IT in operation and production, among others.

Notably, enterprises have shown their solidarity and helped each other overcome difficulties. The survey reported 90% of respondents are willing to support others; over 50% have extended debt payment deadline for partners; 40% shared their customers with others; and many others are responding to the government’s call in the fight against the pandemic.

After the outbreak of the pandemic, Prime Minister Nguyen Xuan Phuc issued Directive No.11 on March 5 providing measures to support the business community and ensure social security.

The PM’s directive served as a legal basis for a number of government’s supporting programs, including a credit aid package worth VND300 trillion (US$12.87 billion), a VND180-trillion (US$7.63 billion) fiscal stimulus package in forms of delay of payment of value-added tax, corporate tax and income tax, and a financial support package for vulnerable people worth VND62 trillion (US$2.7 billion).

The national conference between the PM and the business community on May 9 is expected to help boost economic recovery, said Vice Minister of Planning and Investment Vu Dai Thang at a press conference on May 7, referring to PM Phuc's suggestion that at a time when Vietnam has gradually contained the Covid-19 pandemic, this is an opportunity for businesses to recover and resume operations.

The conference is slated to focus on the impacts of the government’s supporting programs over the past months; listening to recommendations from enterprises for greater efficiency in future policies and programs.

Thang said as the conference will be live broadcast on the national broadcasting station VTV as well as on social media. Hundreds of thousands of 800,000 enterprises, household businessese and citizens are expected to watch the event. 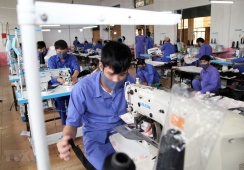 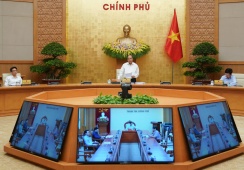