The Hanoitimes - New regulations shows that the SBV will reduce one-way intervention in the foreign exchange market.

The State Bank of Vietnam (SBV), the country’s central bank, has been working on measures to address the US’s tag of currency manipulation against Vietnam.

At the end of 2020, the SBV announced new regulations on buying foreign currencies from commercial banks. To be specific, from December 31, 2020, the SBV stopped listing spot bid-rates on USD/VND and stopped buying USD in the spot market.

From January 4, 2021, the SBV extended the USD forward contract term to 6-month instead of 3-month at the USD/VND rate of VND23,125. Besides, commercial banks are only allowed to cancel one-time the entire transaction value of the forward contract.

According to the VDSC, this move is considered as a first step to remove the currency manipulation designation by the US Treasury.

“By engaging more in forward arrangements, the SBV will be able to manage banking liquidity and intervene in the spot market without impacting headline official reserve,” noted the report.

In addition, the SBV could mitigate the risk of being labeled as a currency manipulation in the upcoming reports by the US Treasury as the 6-month term will help the SBV avoid the violation of the third criteria which requires the one-sided intervention in the foreign exchange market in six of the last twelve months.

Meanwhile, due to the substantial increase in foreign exchange (FX) reserves last year, reserves are sufficient in the context of the managed exchange rate regime based on IMF’s metric. Data from the SBV revealed the FX reserves reached approximately US$100 billion at the end of 2020, an increase of 26.5% year-on-year against early 2020 or US$21 billion.

Based on the most recent evaluation of the International Monetary Fund (IMF) in 2018, the VDSC estimated that Vietnam’s reserve coverage is currently at more than 100% of the adequacy metric, implying less pressure to accumulate reserves by the SBV.

Therefore, new regulations shows that the SBV will reduce one-way intervention in the foreign exchange market, stated the VDSC.

“In other words, regulators could allow a greater exchange rate flexibility in the medium and long-term thanks to sufficient FX reserves,” it added.

In the short-term, as the SBV stopped buying USD in the spot market, the net FX position of many banks is highly positive, which could lead to an appreciation in the official exchange rate. On the other hand, the unofficial market might translate the change in FX intervention practices as a negative move, as a result, leading to a temporary increase in the unofficial exchange rate.

“An expected rise in the trade surplus and capital inflows in 2021 will put more upward pressure on the VND on the backdrop of a weakening USD,” stated the VDSC.

If the SBV targets to keep the exchange rate stable, regulators will still have to intervene in the foreign exchange market, it noted.

The VDSC suggested a bilateral talk between Vietnam and the US could prompt a change in currency intervention practices, instead of a change in the exchange rate regime. In addition, a modest nominal appreciation is appropriate to remove the currency manipulator tag set by the US Treasury Department.

Regarding to the ongoing investigation on Vietnam's acts, policies, and practices related to the valuation of its currency initiated by the US Trade Representative (USTR), results of the recent public hearing were positive as 18/22 participants voiced their support for Vietnam. Most of them urged the US Treasury to refrain from imposing trade remedies and to choose bilateral negotiations in tackling concerns around the VND currency valuation. 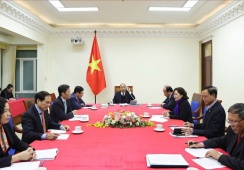