The Hanoitimes - At present, the Covid-19 pandemic has caused a decline of 7% year-on-year in trade turnover of agro-forestry-fishery products between Vietnam and China.

Vietnamese Minister of Agriculture and Rural Development Nguyen Xuan Cuong on April 16 held a meeting with Chinese Ambassador to Vietnam Xiong Bo to discuss measures to boost bilateral cooperation in agricultural trade, especially at border gates as the two nations are fighting the Covid-19 pandemic.

At present, the Covid-19 pandemic caused a decline of 7% year-on-year in trade turnover of agro-forestry-fishery products between Vietnam and China, said Cuong.

Cuong added anti-virus measures are slowing down customs clearance of Vietnam’s farm produce exports to China while trade promotion activities are being disrupted as a result of the current crisis.

Vietnam currently exports nine types of fresh fruits and vegetables to China via official channels, and the two countries are finalizing procedures to include an additional eight to the trade list.

Cuong expected China to speed up administrative process so that more agricultural products from Vietnam are allowed to enter the Chinese market, which in turn contribute to bilateral trade turnover and agricultural development in the two countries.

Chinese Ambassador to Vietnam Xiong Bo said Vietnam is China’s largest and most important trading partner in Southeast Asia, accounting for 25% of China’s trade revenue from the region.

Referring to case of long line of trucks carrying goods waiting for clearance at border gates on the Vietnamese side, Xiong Bo said this is a temporary situation.

The Chinese ambassador said efforts to fight the pandemic must go hand in hand with economic development and trade promotion.

As China is maintaining tight border controls on fear of the spread of the pandemic, Xiong Bo suggested that Vietnam should use the Dong Dang – Pingxiang railway route to transport goods to China, saying this would relieve pressure on major border gates such as Tan Thanh and Huu Nghi.

Both Cuong and Xiong Bo agreed that once the pandemic is contained, the two countries would strive to boost trading activities to ensure higher turnover compared to 2019. 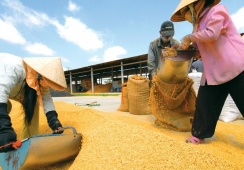 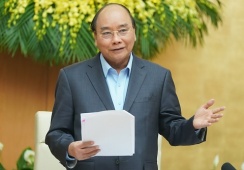 Vietnam seeks to strengthen agricultural trade with US