Vietnam has confirmed two Chinese nationals have tested positive with the new coronavirus, and government agencies have taken urgent steps to stop the spread of this pneumonia virus.

Li Ding, 66, and his son Li Zichao, 28, were quarantined at Cho Ray Hospital in Ho Chi Minh City on January 23, the Ministry of Health said.

This is Vietnam's first confirmed cases of individuals infected with the new coronavirus that have claims two dozens of deaths in China after it was first detected in Wuhan on December 31.

The Vietnamese ministry announced the father arrived in Hanoi from China’s Wuhan city, where the new virus emerged, on Jan. 13 and travelled through the country before eventually meeting up with his son in Nha Trang beach city in central Vietnam. Both of them traveled to Saigon and the neighboring Long An province later.

They must have passed on the infection among themselves, Dr. Nguyen Ngoc Sang, the head of tropical diseases at Cho Ray hospital, said Thursday.

The patients’ fever has subsided and they are now able to consume food and drinks, doctors said.

More cases are expected to be announced as the two patients have traveled through different places in the country by plane, train, taxi and could have contacted with many people.

The Vietnamese Ministry of Health has held an inter-ministerial meeting this morning to discuss measures to curb the spread of the virus in the country. Personnel of the International Disease Control Center in Ho Chi Minh City are asked to stay in the city.

The ministry has warned people to keep distance from people with acute respiratory infections and wear a mask when talking to them. Personal hygiene should also be paid special attention to.

Equipment to monitor arriving passengers’ body temperature has been installed at airports in Hanoi, Saigon, Danang and Cam Ranh which are favorite destinations for Chinese tourists. China accounts for one third of foreign arrivals to Vietnam per year.

According to Chinese authorities, the death toll of the SARS-like disease has risen to 25. Restrictions on travel and public gatherings have been implemented in Wuhan and in several nearby municipalities, Bloomberg reported.

The number of confirmed cases in mainland China rose to 830 as of Jan. 23, including 177 cases in severe condition and the 25 deaths, the National Health Commission said in a statement.

In addition to Vietnam, the disease has spread to other countries and territories such as Thailand, South Korea, Japan, Taiwan, Macau, Hong Kong, the United States and Singapore.

The World Health Organization is scheduled to meet again on Thursday after ending a meeting Wednesday without deciding whether to declare the illness a global health emergency. 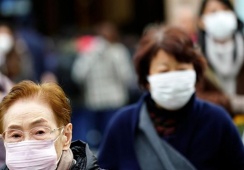