The Hanoitimes - As Covid-19 remains unpredictable globally, it would be a “big mistake” if Vietnam relaxes the vigilance against the pandemic, Prime Minister Nguyen Xuan Phuc has said.

Vietnam would continue to stay alert against the Covid-19 pandemic in 2021 and this attitude is key for the country to maintain positive economic performance, according to Prime Minister Nguyen Xuan Phuc.

While the doors to Vietnam are open for foreign investors, diplomats or experts, quarantine and monitoring measures are still in place, stated Mr. Phuc at a group discussion among National Assembly Deputies on November 2, saying Vietnam would not sacrifice the well-being of the people for economic benefits.

As Covid-19 remains unpredictable globally, it would be a “big mistake” if Vietnam relaxes its vigilance against the pandemic, he noted.

According to Mr. Phuc, in a normal situation, Vietnam is forecast to receive 21 million foreign tourists this year with revenue of over US$60 billion. However, Vietnam is willing to accept the losses to protect the health of its people, Mr. Phuc continued.

Thanks to effective anti-Covid-19 measures, only Vietnam and another country in the Asia – Pacific region can attain positive economic growth this year, while a study from The Economist also suggested that the country is among the top 16 most successful emerging economies to date.

Moreover, difficulties that local enterprises are facing as a result of the pandemic also lead to a high number of people remaining idle, Mr. Phuc said.

Mr. Phuc said besides supporting programs in terms of waiving and freezing interest rates and debt for enterprises and the people, direct support measures have not generated the  expected effects, for which the government are lowering the barriers for more enterprises to access these programs.

The government is concerned about the lives of the people and gives a high priority to the development of major economic sectors for greater economic growth, he stressed.

Regarding heavy losses in people’s lives and assets from natural disasters in the central region, the Vietnamese PM said the government would provide more effective policies to support the people, including housing, giving medical treatment for those injured and searching for missing ones.

There should be a comprehensive evaluation on the cause of flooding and landslide in the central region to minimize the human factor regarding these issues, he stated, adding Vietnam is one of the countries with highest percentage of forest cover at over 43%.

Mr. Phuc said Vietnam would continue to raise the forest coverage in the future. In the meantime, the government will limit the construction of small-scale hydropower plants as an effort to prevent deforestation.

Also, at today’s meeting, Vice Chairman of the Committee on Economic Affairs of the National Assembly Duong Quoc Anh requested the government to assess the full impact of natural disasters on economic growth.

For this year, the NA’s Committee on Economic Affairs predicted Vietnam’s GDP growth to reach 2.3% and then rebound to 6.5 – 6.8% in 2021. However, the timing of these predictions was before the landfall of major typhoons into Vietnam.

PM Phuc in a government meeting on October 30 suggested Vietnam’s GDP growth is on track to expand 2 – 3% this year, despite severe consequences from flooding. 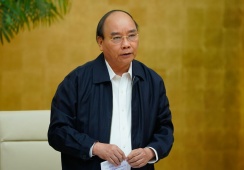 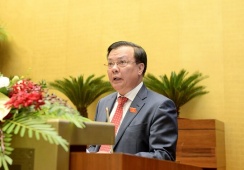 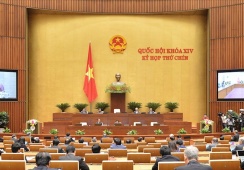 Highlights from the year-end meeting of the National Assembly