The Hanoitimes - This is the second time in less than two months that Vietnamese fishermen were attacked by Chinese vessels.

The Vietnam Fisheries Society (VINAFIS) has protested against China's ramming of a Vietnamese fishing boat in the South China Sea and demanded Beijing to compensate Vietnamese fishermen.

“China’s similar activities have repeated for many times and become more serious, causing insecurity and indignation for Vietnamese fishermen, reduction of catching volume and economic damage, and infringing Vietnam’s sovereignty and violating Vietnamese and international law,” VINAFIS said in a document.

The Chinese action is inhumane as it harm lives of the fishermen and damaged their assets when they were catching within Vietnam’s Hoang Sa (Paracel) islands, the society said in a document sent to the Government Office, the Central Party Commission for Foreign Affairs, the Ministry of Foreign Affairs, and the Ministry of Agriculture and Rural Development.

VINAFIS has demanded authorized agencies to strongly condemn the Chinese action and take tough measures to stop the assault on Vietnamese fishermen within Vietnamese waters.

On June 10, while operating near the Paracel islands, a Vietnamese fishing boat was rammed by a Chinese vessel near Lincoln island, a rock in the Paracels that is occupied by China, which seized the Paracels from Vietnam in 1974.

People on the Chinese ship seized one ton of fish, a global positioning system, and other equipment worth VND500 million (US$21,500) in total from the Vietnamese boat. 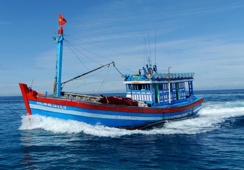