Vietnam draws US$8.5 billion into industrial parks and economic zones in 9 months

The Hanoitimes - IPs and EZs in Vietnam have attracted a total of 10,009 foreign-invested projects with total registered capital of nearly US$197.8 billion to date, 70% of which has been disbursed.

In the first nine months of 2020, Vietnam’s industrial parks (IPs) and economic zones (EZs) drew 517 foreign projects worth US$8.5 billion, according to the Ministry of Planning and Investment (MPI).

IPs and EZs in Vietnam have attracted a total of 10,009 foreign-invested projects with total registered capital of nearly US$197.8 billion to date, 70% of which has been disbursed.

Meanwhile, IPs and EZs have received VND2,340 trillion (US$101.13 billion) in terms of newly-registered capital and additional capital poured into 9,806 projects owned by Vietnamese investors, stated an MPI report, adding 46% of the said amount has been disbursed.

Due to the Covid-19 pandemic, revenues of enterprises operating in IPs and EZs suffered a 3.5% decline year-on-year in the January–September period to US$135.7 billion. Their exports rose 0.7% to US$100.1 billion while their imports slid 1.2% to US$87.2 billion.

Those in IPs and EZs paid taxes of VND79.8 trillion (US$3.45 billion) during the January – September period, representing a 1% increase year-on-year, and employed over 3.83 million workers.

Vietnam currently has 366 IPs covering an area of nearly 113,000 hectares as of the end of September, of which 279 are operational, other 87 are in the process of site clearance and construction. The occupancy rate reached 71.1% at operating IPs.

Additionally, the country has 17 coastal economic zones covering a combined area of approximately 844,000 hectares on land and water surface. 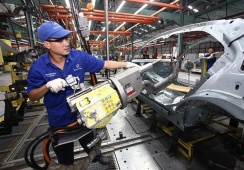