The Hanoitimes - This is the first time in 21 years that Indonesia has made it to the SEA Games men’s football final. Vietnam's last final appearance was 10 years ago when it lost to Malaysia.

Vietnamese people’s dream of winning the top spot in SEA Games men’s football has become true thanks to the “Vietnamese spirit” and the support of the whole nation, South Korean coach Park Hang-seo told media.

The victory was deserved and Vietnamese fans were always there to support the team, Park said after his squad won the gold medal for the first time after six decades of wait on Tuesday night.

Vietnamese men football squad has become unbeatable in the Southeast Asian region after the convincing win over Indonesia 3-0 on a much-awaited match.

The U22’s men team has made the SEA Games 2019 a glorious page in the country’s sport history with continuous victories against other rivals from Cambodia, Thailand, and Indonesia, among others. At the final match of the football tournament, the heavyweights Vietnam- Indonesia clash to gain the highest title finished with absolute superiority of the Vietnam squad.

Indonesian team pushed forward the Vietnamese goal, however, the U22 Vietnam was not in a hurry, they were cautious and actively gave up the seat of the match to the opponent.

The pressure of U22 Indonesia did not last long, just a few minutes after the match started the Vietnamese team regained the game and began to pressure the opponent's goal.

At the 39th minute, the first footballer who made the debut scoring for the Vietnamese team was Doan Van Hau with jersey No.5, who floated above a messy penalty area to head in the goal. In the second half, Hung Dung steered the ball to the far corner and made the second goal for Vietnam.

The last strike was made in the 74th minute by Doan Van Hau again. The rising star tapped in the ball, which comes to his feet after Indonesian rival's save.

On the other hand, the Indonesian team had similar capabilities to Vietnam but couldn’t goal even one score due to the perfect defense layer of the latter.

On social media, Vietnamese and foreign football fans have congratulated the team with joy and pride. 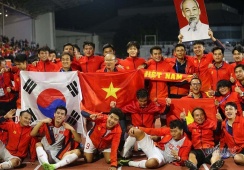 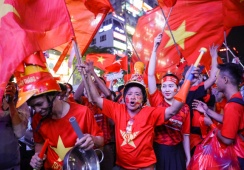