The Hanoitimes - Compared to the end of 2016, Vietnam’s foreign exchange reserve to date has doubled.

In 2019, the State Bank of Vietnam (SBV), the country’s central bank, bought in US$20 billion, taking Vietnam’s forex reserves to nearly US$80 billion, a record figure to date, VnExpress cited Prime Minister Nguyen Xuan Phuc as saying on Monday morning.

A report from SSI Research said except for May and June when the US – China trade war led to a surge in the USD/VND exchange rate, the USD buying prices of commercial banks remained equal to or lower than that of the SBV at VND23,200 for US$1.

Compared to the end of 2016, Vietnam’s foreign exchange reserve to date has doubled, mainly thanks to the continued growing trade surplus in recent years and the increasing amount of inboud remittances. Vietnam is among the world’s top remittance recipients.

The combined trade surplus in the last three years is estimated at nearly US$20 billion. In 2019, the figure reached a new record of US$9.9 billion as Vietnam’s trade turnover exceeded the US$500-billion mark for the first time.

Meanwhile, Vietnam is predicted to be among the 10 largest remittance recipients with an inflow of nearly US$16.7 billion in 2019, or 6.4% of its GDP, a slight increase from the US$16 billion received in 2018, according to the World Bank’s latest data.

This would be a third consecutive year that Vietnam remains in the top-10 ranking in terms of remittances. The figure was US$13.8 billion in 2017 and US$15.9 billion in 2018. 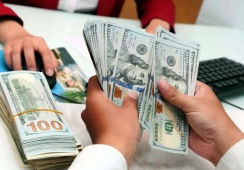