The Hanoitimes - Vietnam's headline inflation averaged 5.6% year-on-year in the first quarter, but has been gradually decreasing since last December.

There is a high chance that Vietnam's inflation could stay far below the 4%-target in the second half of 2020, thanks to a sharp decline in crude oil prices, stricter control on food prices, and administrative subsidies for electricity, according to Viet Dragon Securities Company (VDSC).

Headline inflation averaged 5.6% year-on-year in the first quarter 2020, higher than the 4.9% rate recorded in the same period last year, while core inflation was recorded at 3.1% year-on-year, the highest level in the last five years.

However, both indicators have been gradually decreasing since last December, stated the brokerage firm in a report.

“Overall, inflation has been on the right track, which is critical under general macroeconomic challenges facing the nation,” the report stated.

The plunge in crude oil prices is reminiscent of a ‘disappearance’ of inflation in Vietnam in 2014-2015 when energy prices lost 70% over an 18 months period. Since the disagreement among OPEC+ members, crude oil producers have been severely affected, leading to an oil crash.

How much of the decline in oil prices translates into a drop in gasoline and petroleum prices at the retail level is a decision for the government to take. Up to now, the government has shown a strong commitment to drag inflation down as local retail prices have decreased by 50% over the very short term. Such a price decrease could lead to positive effects on households’ wealth.

In contrast to these easily coded moves in gasoline prices, the decentralized pork market is a big headache and requires massive efforts to drive output prices down. Since last November, pork prices almost doubled and remained at the peak due to the severe damage of the African swine fever to pork supply and a sharp stocking increase caused by the side-effect of the Covid-19 pandemic.

As a consequence, the subgroup of food is contributing four percentage points to headline inflation.

Although pork prices haven’t benefited from price stabilization schemes, officials are determined to bring these down by planning a careful reproduction effort. As a result, large-scale producers are committed to reducing their selling prices of live hog to VND70,000 (US$2.93) per kg from April 1. Furthermore, it is expected that a one-quarter decrease in pork prices can be possible at the start of the third quarter.

Last but not least, the government is planning to reduce electricity bills by 10% in order to offset a part of the pressure from the pandemic on the economy for three months from April to June. Most of households and corporates will gain from that subsidy. In general, the visible hand is trying to coordinate the economic activities as good as possible in order to weather the storm. 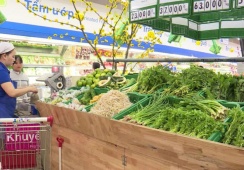